We turn our attention to the relegation fight as RKC Waalwijk takes on the challenge of Fortuna Sittard. The hosts have moved out of relegation slots in recent weeks but still have a long way to go to ensure survival in the Dutch top-flight football.

Free Match Tips from Punditfeed for RKC vs Fortuna Sittard

Here are some bias-free tips we have put together for RKC vs Fortuna Sittard.

After a troubling start to the campaign, RKC Waalwijk has steadied themselves. They have forced their way out of the Eredivisie relegation slots and earned a place in the semi-finals of the KNVB Becker. The same cannot be said about Fortuna Sittard, who have lost seven of their last ten competitive fixtures. With RKC winning four of their last seven fixtures, two of which came in the cup, we are backing them to claim the three points on offer.

Put RKC into the equation and goals become a feature. Five of their last seven competitive fixtures have finished with Over 2.5 total goals and this meeting will not be an exception. Add to this fact that Fortuna has conceded 14 goals in their last five Eredivisie fixtures and we have all the ingredients for a high scoring affair.

Fireworks have gone off whenever RKC have taken the pitch of late. It is to their credit that they have found success despite conceding regularly. Five of their last seven fixtures have seen both sides score and this should come to fruition against Fortuna. The visitors have struggled to score but found success in their last three meetings with RKC.

Joseph Oosting ensured RKC Waalwijk stave off relegation last season and has similar responsibilities this time around. With two wins from their last five outings, RKC has steered cleared out of the relegation slots. They have a five-point safety cushion on their hands and can extend it further with a positive result against Fortuna Sittard. A win takes them as high as 11th on the points table and gives them further security.

A midtable finish like last season looks unlikely for Fortuna Sittard this time around. On the contrary, Sjors Ultee has to first navigate their way out of the relegation slots. Fortuna are five points adrift of safety in a season that continues to take a turn for the worst for them. This has been managed thanks to their defensive output, which stands as the worst in Eredivisie by a margin.

Looking for the best odds for RKC vs Fortuna Sittard? We’ve got you covered. Check out our list of odds from the popular bookies and a few important stats to help you make a good prediction.

FAQ about RKC vs Fortuna Sittard 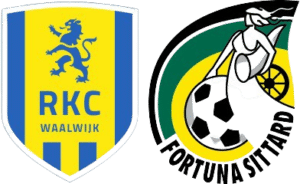 What was the last H2H result? RKC and Fortuna Sittard played a 2-2 draw.