Rangers are enjoying their European tour so far this season. Will that continue here? Find out with our Red Star Belgrade vs Rangers preview here along with the predictions and free tips we mention along the way.

Red Star have won seven of their last eight games; they’ve lost just one of their last 18 games in all competitions. However, it’s fair to point out that Red Star’s only loss in that stretch was against Rangers. On the other hand, we have a Rangers side that has won four games in a row; they have no losses in their last 11 games, with eight wins and three draws. These are two consistent teams, but then again, Rangers cruised to a comfortable 3:0 win in the first leg; because of that, we don’t think Rangers will lose this match.

Both teams have actually kept a lot of clean sheets lately, but this pick is mostly based on how they score goals; they’ve both been very consistent in terms of scoring goals. Red Star Belgrade found the back of the net in 19 of their last 21 games across all competitions. Similarly, Rangers have had no trouble scoring goals; as they’ve done so in all of their last 11, and 33 of their last 34 games. Considering how consistently both teams have scored goals, we should expect goals at both ends.

These are some of the highest scoring teams in their respective leagues. Red Star scored 10 goals in their last four games alone; due to the way they score, their games have mostly been high-scoring. Five of Red Star’s last six games went above the 2.5 goal mark. In the same vein, Rangers have had their fair share of high-scoring games; as four of their last six games went over 2.5. On that note, our final prediction for this game is over 2.5 total goals.

The best odds for Red Star Belgrade vs Rangers

Red Star Belgrade bounced back from their disappointing 3:0 loss to Rangers with a win at Metalac; they have now won seven of their last eight games across all competitions. Dejan Stankovic’s will have to overturn a huge three-goal deficit if they intend to advance to the quarterfinal; will Milan Pavkov deliver the goals?

Rangers have been on fire lately; they’ve won four games in a row, and are unbeaten in their last 11 games in all competitions. The Gers will hope for similar results to the reverse fixture of this clash; Alfredo Morelos will be the man to watch out for.

The final word on Red Star Belgrade vs Rangers 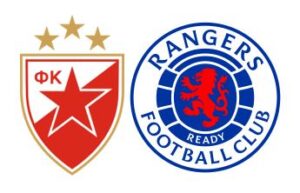