The last game to be played in this round of Spanish Segunda on Sunday is the Real Zaragoza vs Lugo duel. So, check our preview of this match to learn more about it and to get some free betting tips.

Our top Real Zaragoza vs Lugo betting picks and predictions

If you need help to determine what is the best bet for Real Zaragoza vs Lugo, check our best betting tips for this duel:

Although Lugo had a better start than Real Zaragoza since they won four points compared to the two points won by the home team, we expect Real Zaragoza to win this match.

The biggest reason is the fact that Real Zaragoza is hosting the game. After all, the two teams are pretty similar in terms of quality, so home-court advantage could be the deciding factor. Also, Real Zaragoza beat Lugo in the last two duels which they hosted.

Real Zaragoza and Lugo to Draw at Half Time

While we can see the home team winning the game, we can also see Real Zaragoza and Lugo being tied at half time and the match decided in the second half.

While we don’t usually recommend betting on correct score since the chance of success is pretty low, sometimes we like to take a punt at this betting market and its high odds.

In this case, we can see the match ending 1-0 for Real Zaragoza. First of all, we expect the home team to win and we don’t expect many goals. Secondly, that was the correct score in the last two h2h duels between these teams in which Real Zaragoza was the host of the game.

Real Zaragoza vs Lugo preview: Can Zaragoza get the first win of the season?

After the first three rounds of the new Segunda season, Real Zaragoza remains without a win. In fact, the team still has to score a goal this season, although they managed to get a couple of draws nonetheless. Meanwhile, Valentin Vada is currently injured and out of the next game, while Jaume Grau is suspended at this time.

The team that finished last season near the relegation zone had an average start of the new season, with one win, one draw, and one loss. That type of form will likely keep them comfortably out of relegation contention, but it will also keep them far away from any meaningful finish. Álex Pérez and Orest Lebedenko are currently out of the team with injuries.

The top odds and key figures for Real Zaragoza vs Lugo

If you want to place a bet on the best Real Zaragoza vs Lugo odds, check our selection of odds from the main UK betting sites: 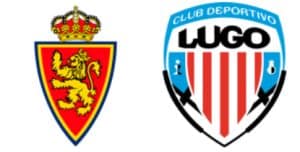