If PSV can avoid defeat in Spain they’ll book their spot in the next round of the Europa League. Given Real Sociedad’s recent form, they’ll fancy their chances too but will they get the job done? Find out with our Real Sociedad vs PSV preview here along with the predictions and free tips we mention along the way.

Real Sociedad have lost three of their last four games in all competitions; they’ve won just one of their last five games. It’s important to note that Sociedad’s only win in that stretch came against Panderia Pulido, a team in the fourth tier of Spanish football. On the other hand, PSV have won four of their last five games; they have no losses in their last seven games across all competitions. This is a tricky game, as only one of these sides will qualify for the next round; Sociedad will qualify for the round of 32 if they win, and PSV will qualify if they don’t lose. Considering both teams’ recent form, we do not believe that PSV will lose this match.

A clean sheet but for who?

Our final pick for this match-up will be on the over/under goals market. We’ve already established that Sociedad have not scored in three of their last four games; it’s also important to note that most of their games have been low-scoring as a result. Seven of Real Sociedad’s last nine games have gone under 2.5. In like manner, PSV have had their fair share of low-scoring games; three of their last four games have gone below the 2.5 goal margin. With this in mind, we shouldn’t expect a lot of goals in this match.

The best odds for Real Sociedad vs PSV

Real Sociedad’s woes continued with a 2:0 loss at home to Real Madrid last weekend; they have now lost three of their last four games in all competitions. Los Txuri-Urdin will need to win this match in order to qualify for the round of 32; it’ll be interesting to see how Mikel Oyarzabal will perform today.

PSV extended their unbeaten run to seven games with a 4:1 rout of Utrecht last weekend; they’ve won four of their last five games, scoring 13 goals and conceding just three. PSV will need at least a draw from this game to make it to the next stage; Cody Gakpo will be the man to keep an eye out for.

The final word on Real Sociedad vs PSV 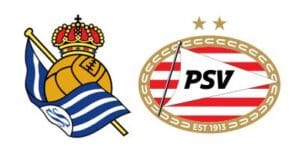