Another interesting matchup in the next round of La Liga 2 is the Real Oviedo vs Granada duel. With that in mind, we have prepared a preview of the match for you, along with some free betting tips.

If you can’t decide what is the best bet for the Real Oviedo vs Granada duel, take a look at our top betting predictions for this game:

The home team has been in very poor form lately and the entire season for that matter, so they are currently in the relegation zone. Meanwhile, Granada is seventh in La Liga 2 at the moment, with just one loss in the last six matches.

So, the guests have clearly done much better this season than Real Oviedo and they are the better team on paper as well, so we expect them to win this game and stay in the race for the top.

Real Oviedo and Granada to Draw at Half Time

Although we expect Granada to win, we can see Real Oviedo putting up a fight. In fact, we expect this to be a very close game and the two teams to be tied at half time.

It’s been a while since these two teams last met, but in their prevoius four duels, we saw both teams score twice. So, based on that, this game could go either way, but we don’t expect both teams to score here.

The reason for that is quite simple – both teams have scored in just 7% of all Granada matches in the league this season, while the same is true for 36% of all Real Oviedo games in Segunda until now.

With one win, one draw, and four losses in the last six games in the league, Real Oviedo has clearly struggled lately. In fact, they have struggled since the season started and they are currently in the relegation zone with thirteen points from fourteen games. Meanwhile, Marco Sangalli, Borja Sanchez, and Koba Koindredi are out with injuries right now.

In the last six games in Segunda, Granada has two wins, three draws, and one loss, so they have done well lately, but they are still outside of the playoffs zone, albeit not by a lot. Still, their fans are certainly expecting better since Granada is one of the main favourites for promotion. Sergio Ruiz and Andre Ferreira are on the team’s injury list at the moment.

The latest odds and key stats for Real Oviedo vs Granada

If you don’t want to waste time looking for the best Real Oviedo vs Granada odds, check them all out on our website, right here:

Real Oviedo vs Granada – Q & A 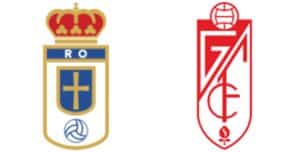