Quevilly will host Rodez this weekend in a Ligue 2 that could determine the fate of both teams going forward with only seven games to play before the season ends. We preview the Ligue 2 match and provide our readers with the best free predictions. Read below for more details.

There have been three meetings between Quevilly and Rodez previously. In those matches, goals were recorded on only one side of the pitch. Rodez was the better opponent in those games, winning twice while Quevilly won once. Here are our best three picks for this second meeting of the 2021/22 season:

Both sides to be on the score sheet

We have two struggling outfits in this duel. Both teams have won in their last eight games. The hosts lost their last two games, conceding two goals in each while Rodez faltered in one game and settled for a draw in the other from their two matches. Weak defences is the reason we expect goals on both sides.

For the same reasons we expect these teams to score in this game, the probability of having more than two goals at full-time is high. The reverse match had three goals and since then, things have even got worse defensively for Quevilly and Rodez.

Our last tip for this game is a draw at full-time. It is a battle for survival between two teams that are struggling to get points. Only two points separate 16th placed Rodez from Quevilly that currently sit on the relegation playoff spot. An even game is our expectation and with that, a draw of 2-2 is a likely outcome in this game.

Quevilly Rouen hosts Rodez in Round 32 of Ligue 2 matches this weekend in a game of survival and supremacy. Read the preview below for more tips.

The hosts are under relegation threat ahead of this game. A loss will condemn them to a bitter relegation fight with only seven games to go. On the other hand, a win will be good but not enough to earn Quevilly enough points far above the relegation zone.

Rodez is another Ligue 2 outfit facing the possibility of relegation. While playing against another struggling team this weekend could come with good news, a poor run of form is the biggest worry for the visitors in this trip to Quevilly.

Quevilly vs Rodez Match Odds and the Latest Team Stats

Check out the best odds and current stats for Quevilly vs Rodez in the tables below. 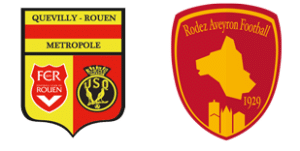 How many goals were scored in the reverse game?

The reverse match had a total of three goals, all of which were scored by Rodez.

When is the Ligue 2 game set to be played?

Quevilly vs Rodez will be played on Saturday, 9th April 2022.