Quevilly Rouen and Sochaux both have a point to prove in this Saturday fixture. While the hosts will fight for survival points as they currently occupy the relegation playoff spot, Sochaux look to maintain its place in top five. Read further to find out how we have tipped this game to end this weekend.

Our Free Predictions for Quevilly Rouen vs Sochaux

The last three and only previous meetings between Quevilly Rouen and Sochaux ended with two draws and one victory to the favour of Quevilly. In this trip to Le Peit-Quevilly on Saturday, Sochaux have the mandate of keeping their top five ambitions alive. Our best three predictions for this game are as follows:

Away team to find the net first

Sochaux have a firm grip on the fifth spot ahead of this game as they are currently ten points above sixth-placed Le Havre.  However, they need more points and winning this game will get them closer to finishing third or second. We expect a more spirited approach from the visitors against struggling Quevilly-Rouen.

Backing away victory is the most sensible thing to do in this game,that is nonetheless expected to be a difficult game for both sides. Sochaux have never defeated Quevilly-Rouen and this trip could be their only chance as the hosts faces the possibility of getting dropped to a lower league.

This will be a difficult match as both teams have something to fight for. While Quevilly Rouen look to keep their hold of the fifth spot or even better their standing, the hosts have a duty to avoid relegation by bagging more points. A difficult game should end with few goals scored at full-time.

Here are additional stats, the best odds and H2H information for this Ligue 2 game between Sochaux and Quevilly Rouen. 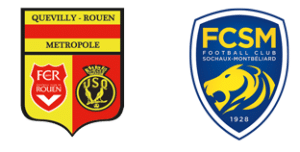 When is the Quevilly Rouen vs Sochaux game taking place?

How did the reverse game end?

The first leg ended draw of 1-1