Quevilly Rouen vs Nimes is our next focus in Ligue 2 match previews. These teams are currently having a poor run of form. Moreover, both sides are hunting for survival points and so, the question is which side will win on matchday? We have the details in this post, so read on for details.

Free Betting Tips and Predictions for Quevilly-Rouen vs Nimes

While Quevilly-Rouen has one win in the last five games, Nimes is without a win in as many previous fixtures. We have analyzed the stats, h2h and available data foe this fixture. Our best three picks are as follows:

Nimes to open the scoring

We expect the first goal to come from Nimes in this duel. First, the visitors defeated Quevilly in all the previous five meetings. Secondly, the hosts failed to score in four of their last five games while Nimes netted in two of the last five outings.

Goals on one side

Scoring in online one match in the last five shows just how Quevilly is poor offensively. The story is not very different from how Nimes has performed in as many games. We are tipping a one-sided scoring outcome.

Quevilly  and Nimes will meet for the sixth time. Here are the team previews ahead of this duel.

Quevilly Rouen has never defeated Nimes in all the only five meetings that have taken place between the two teams. However, the hosting coach boasts boasts three victories and one draw against Nimes head coach. That should hand Quevilly some hope in this game, not to mention home support they will get in this match.

Nimes is without a win in the last five games of 1D and 4L. Just like the hosts, Nimes is having defensive issues. The visitors won the reverse game, including all the previous duels with Quevilly. However, Nimes look far worse than Quevilly. However, based on H2H stats, Nimes can pull a surprise win here.

We also have the best odds for the Ligue 2 game, the latest team stats and current H2H information. Check out the tables below for details. 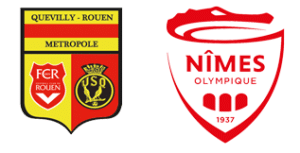 Where is the venue for the Ligue 2 game?

Who will be in charge of this Ligue game?

Aurelien Petit is the matchday referee.

What time will Quevilly-Rouen vs Nimes match kick off?