Quevilly Rouen and Grenoble Foot go against each other for a league meeting at the Stade Robert Diochon this weekend. The focus of this preview will be on providing the best tips for this match.

Both these teams have been going through a horrid run of results of late. The lack of goals from Grenoble is starting to have a major impact on their league position. Quevilly Rouen are unbeaten in four consecutive games at home with promotion-chasing Niort the last team to beat Quevilly Rouen at home. Due to the struggles in front of goal, though, this match might end as a draw.

Grenoble have not scored in three consecutive league outings. They go up against a Quevilly Rouen team who have managed a return of just one goal in the recent games. Both teams are struggling to create or score chances of late. This is likely to lead to a tight match that does not see a lot of goals.

The lack of goals from Quevilly Rouen and Grenoble has been prominent. The latter has especially been very poor going forward with just two league goals scored in the recent six matches. There is a good chance that the visitors might end up failing to score in this game.

Quevilly Rouen are looking to seek revenge for the 2-0 defeat suffered at the hands of Grenoble in the early stages of the campaign. A victory from this match could also be crucial in lifting the club away from the drop zone. There are no injury problems for Quevilly Rouen.

Grenoble Foot have been able to produce a string of poor performances that have put the club on the verge of dropping into the automatic relegation zone. It would take an astronomical turnaround of results for Vincent Hognon’s men to avoid relegation. 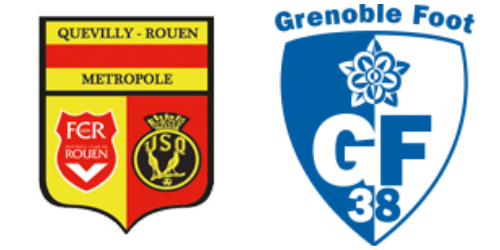 Where is the match going to take place? Stade Robert Diochon

Who is the favourite team to win the game? Quevilly Rouen