PSV and Willem II lock horns in Eindhoven in the Eredivisie on Sunday. PSV need a victory over the Tricolores to keep their title hopes alive. Read our free predictions and find the latest odds for the fixture below in our detailed match preview.

PSV are aiming to exact some revenge for their early-season defeat to Willem II when the teams meet in Sunday’s rematch. Read our top three predictions for this weekend’s fixture below.

PSV need a win to keep hold of Ajax’s coattails at the summit of the Eredivisie and the Boeren have the firepower to blow relegation-threatened Willem II away in Eindhoven. The Tricolores shipped four goals in their last away assignment at Go Ahead Eagles and a higher-calibre PSV outfit should find just as much joy in the final third. With that considered, a stake on the hosts in the over 2.5 team goals market appeals at the prices available.

Willem II have looked alarmingly toothless on the road for an extended period and they have failed to score in each of their last six away fixtures in the Eredivisie. In fact, the strugglers have managed to notch just once in eight away matches since the end of November and that dismal record should allow bettors to back PSV to win to nil with confidence on Sunday.

Remarkably, veteran PSV striker Eran Zahavi scored goals at both the right and wrong end when PSV lost to Willem II in Tilburg back in September, however, we’re tipping the Israeli international to do most of his damage in the correct areas on Sunday. With four goals in his last six Eredivisie appearances, Zahavi is in decent form and the 34-year-old is the standout pick from the anytime goalscorer options.

Yorbe Vertessen, Olivier Boscagli, Armando Obispo and Ryan Thomas are all expected to miss out for PSV this weekend while Phillipp Mwene and Shurandy Sambo are both rated as doubtful. With four games left on the Eredivisie calendar, PSV have a four-point gap to claw back on leaders Ajax, though a last-gasp title now seems unlikely.

Willem II could be without the services of injured trio Miquel Nelom, Ringo Meerveld and Thijs Oosting on Sunday. The Tricolores gave their survival hopes a shot in the arm with a 1-0 win over Vitesse last time out. There are now just two points between them and safety near the foot of the table.

Top Betting Odds and Stats for PSV vs Willem II 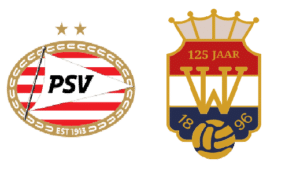 PSV have been prices as odds-on favourites to pocket the points at Willem II’s expense on Sunday.

Willem II recorded a surprise 2-1 win over PSV when the teams last met on September 25th.