PSV welcome RKC to Eindhoven in the Dutch Eredivisie on Sunday. The hosts need a win to keep their title aspirations alive. Read our free predictions and find the latest odds for the fixture below in our detailed match preview.

Only a victory will do for PSV against RKC as the Boeren attempt to keep the Eredivisie title race alive. Read our top three predictions for this week’s fixture below.

PSV had to navigate a tough test in England against Leicester City in the Europa Conference League on Thursday evening and with fatigue a factor, Sunday’s meeting with RKC could be a more keenly contested affair than many expect. The visitors have scored in 100% of their last seven Eredivisie away assignments and they have the mettle to trade blows with the Boeren in Eindhoven. With that considered, back both teams to register at the Phillips Stadion.

When RKC visited Ajax last month, they went toe-to-toe with the champions in a five-goal thriller and though they eventually lost, they evidence from that fixture suggests we should expect another glut of action when Joseph Oosting’s travel to take on second-placed PSV. Over 3.5 has goals landed in three of the last four encounters between the clubs and we’re tipping Sunday’s tussle to follow suit.

Veteran Israeli attacker Eran Zahavi has really come into his own in recent weeks, netting seven times in his last eight appearances for PSV in all competitions. The 34-year-old registered in the corresponding fixture against RKC in Eindhoven last season and Zahavi is worthy of your consideration in the anytime goalscorer market again on Sunday.

Philipp Mwene and Ryan Thomas are both out injured for PSV, while Erick Gutierrez is considered a doubt. Cody Gakpo, Jordan Teze, Ibrahim Sangare and Andre Ramalho were all fit enough to start against Leicester on Thursday evening and all four players are in line to feature again when the Eredivisie resumes this weekend.

RKC could be without Sebbe Augustijns and David Min this weekend, though Joseph Oosting has options to choose from elsewhere. RKC pushed their unbeaten streak to three matches with a 1-1 draw at home to Utrecht last time out, while their last away test saw them win 2-1 at high-flying Vitesse.

Top Betting Odds and Stats for PSV vs RKC

You can find our list of the best stats for Sunday’s game below alongside a tool to help you select the best odds. 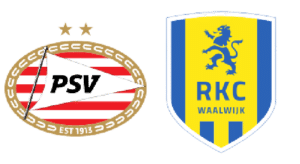 PSV vs RKC will be contested at the Phillips Stadion in Eindhoven.

Who is RKC’s top scorer this season?

With ten goals so far, Michiel Kramer is RKC’s leading scorer in the Eredivisie this season.