PSV and Heracles meet in Eindhoven in the Eredivisie on Sunday. PSV are back in the title race and a win this weekend will aid their push for honours. Read our predictions and find the latest odds for the fixture below in our expert match preview.

PSV have won six of their last seven games in all competitions ahead of another winnable fixture against Heracles on Sunday. Read our top three expert predictions for this week’s fixture below.

PSV are firmly back in title race thanks to Ajax’s hiccup at Go Ahead Eagles and the Boeren can strengthen their push for top spot with a win over Heracles. With nine defeats in 11 assignments on the road, the visitors are the Eredivisie’s worst-performing away team this season, though recent consolation efforts at Feyenoord, Vitesse and AZ suggest the Heraclieden can notch again. With that considered, we recommend coupling a home win with a both teams to score sweetener on Sunday.

The Philips Stadion in Eindhoven has been witnessing plenty of goals in recent weeks and five of the last six matches there have produced over 2.5 goals. Due mainly to their abject defending, four of Heracles’ last five away tests have also delivered three or more goals and they could suffer again when they travel to take on a formidable PSV outfit on Saturday. Goals are on the agenda again then, so stick to the over 2.5 totals line.

Heracles’ rotten form on the road in 2021/22 has been incredible given their comparatively strong results at home. For whatever reason, Frank Wormuth’s players have a mental block when playing the role of visitors and their knack for slow starts certainly isn’t aiding their cause. Heracles have gone in at the break behind in seven of their 11 away fixtures since August and they are worth opposing in the half-time result markets again on Sunday.

PSV booked their spot in the KNVB Beker semi-finals on Wednesday evening when they battled their way to victory over a robust Go Ahead Eagles side in Deventer. The Boeren are still going full-throttle in three competitions in Roger Schmidt’s last season in charge, though a raft of injuries is stretching their squad thin. Up to six players could be absent for PSV this weekend.

Heracles got the better of bottom club PEC Zwolle in their last runout, though Head Coach Frank Wormuth could have a patched-up team on Sunday with half a dozen injury concerns in his ranks. Heracles aren’t in immediate danger of being dragged into a relegation battle, though they will need to keep the good results coming at home to avoid a late dogfight.

Top Betting Odds and Stats for PSV vs Heracles

Below you can find the top stats for Sunday’s contest below along with a tool to help you pick the best odds. 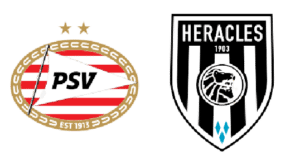 Where in the league are these teams positioned?