Portsmouth and Accrington are separated by just five points coming into the League One encounter at Fratton Park. The purpose of this preview will be to provide the top betting tips for this game.

Portsmouth were able to register a fourth win in the last five matches by beating Oxford United 3-2 at home. Sean Raggett, George Hirst, and Hayden Carter were the scorers for Portsmouth just before and after the break. Accrington overturned a sequence of back-to-back losses with a 3-2 win over Wycombe. Goals from Vokes and Kaikai were overturned by Adedoyin, Sykes, and Pell.

Portsmouth have registered four wins in the recent five matches. Crucially, Danny Cowley’s men have been able to get a string of resilient performances during this period. Portsmouth have players like Aiden O’Brien who have been in excellent form over the last few weeks. Accrington are also unlikely to give up and they are unbeaten in the last six meetings with Portsmouth. However, Portsmouth’s home advantage coupled with the recent form should get them to a win.

A feature of Portsmouth and Accrington matches in recent weeks have been the goals. Portsmouth have scored an incredible 16 goals in the recent six matches, while Accrington have witnessed a combined tally of 17 goals in the last six games. A 2-2 draw took place in the reverse fixture back in October and one can expect a similar flurry of results this time around.

Apart from the clean sheet against Doncaster, Cowley’s men have been unable to set up shop even when they have been playing well. Accrington are fresh from scoring three goals during the weekend. Even if the visitors do not get a lot of goals away from home, this match should witness goals at both ends.

Portsmouth continue to climb up places in the League One table courtesy of the amazing recent form. Pompey are now just eight points away from getting into the top six. Manager Danny Cowley sees the addition of Reeco Hackett-Fairchild to the treatment table, which already has Shaun Williams, Michael Jacobs, Paul Downing, and Kieron Freeman unavailable because of injuries.

Accrington were relieved to pick up the recent victory Wycombe, as it keeps the faint hopes of play-offs alive. Accrington manager John Coleman has a very poor record against Danny Cowley, but he does have most of the squad available for the game. Mitchell Clark is suspended for the match while Joe Pritchard remains unavailable because of injury.

Recent Form and Other Key Stats for Portsmouth vs Accrington

FAQs on Portsmouth vs Accrington game 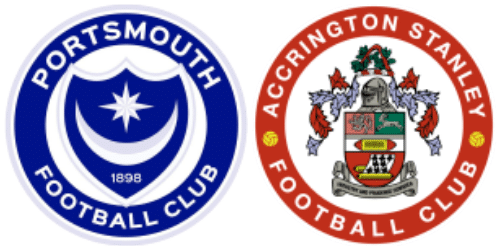