Plymouth welcome Oxford to Home Park in England’s League One on Saturday. Fourth meets fifth in the third tier as Argyle host The U’s. Read our free predictions and find the latest odds for the fixture below in our detailed match preview.

Plymouth are targeting their sixth straight victory at Home Park when Oxford come to town on Saturday. Read our top three predictions for this weekend’s fixture below.

Plymouth were narrowly beaten by Ipswich (1-0) before the international break, though Argyle’s form was exemplary before that with six straight victories in League One. At Home Park, fourth placed Plymouth have also won five games on the bounce and having already beaten fifth placed Oxford 3-1 earlier in the campaign, the hosts are favoured in the markets to complete the double.

We’ve tipped Plymouth to make home advantage count this weekend, however, Oxford are the highest-scoring team in League One this term and Karl Robinson’s side can always be relied upon to find the net. Both teams registered when our featured sides last locked horns in October and a stake in the same market could be a profitable move again this weekend.

Oxford’s commitment to attacking football usually ensures that supporters are treated to open, end-to-end battles whenever they play and another high-octane clash is on the menu this weekend. Six of the U’s last eight matches have produced over 2.5 goals, while the net rippled four times when Oxford and Plymouth last met before Christmas. Another thrilling matchup is anticipated on Saturday, so stick to the over 2.5 totals line.

Alfie Lewis, Dan Scarr, Brendan Galloway and George Cooper could all be missing from the Plymouth midfield this weekend. Argyle are well-positioned to claim a playoff berth this term, though boss Steven Schumacher still has his eyes on one of the automatic promotion places. Only two clubs in the division have pocketed more points at home than Plymouth in 2021/22.

Skipper Elliott Moore, Sam Baldock, Marcus Browne, Jamie Hanson and Alex Rodriguez-Gorrin are all listed as injury concerns for Oxford ahead of Saturday’s trip to Plymouth. Oxford look good to land a playoff place this season, though their away from remains a worry. The U’s have dropped points in 11 of their 19 contests on the road since August.

Top Betting Odds and Stats for Plymouth vs Oxford

You can see our list of the top stats for Saturday’s game alongside a tool to help you choose the best odds. 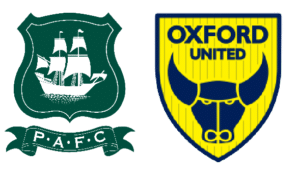 Who is Plymouth’s leading scorer this season?

With 16 goals, Scottish attacker Ryan Hardie is Plymouth’s leading scorer in League One this season.

Plymouth vs Oxford will be contested at Home Park on Saturday afternoon.