Plymouth and Accrington meet at Home Park in League One on Saturday. Promotion-chasing Argyle are targeting another victory this weekend. Read our free predictions and find the latest odds for the fixture below in our detailed match preview.

Plymouth have won four matches on the spin ahead of their latest test against Accrington in League One. Read our top three predictions for this weekend’s fixture below.

Plymouth have won four fixtures on the bounce in League One and Argyle look ready to fight tooth and nail for the playoff position they currently occupy. Accrington meanwhile, have lost five of their last six assignments on the road – a run that is certain to have dented Stanley players’ confidence ahead of a tough task against Plymouth. Everything points towards a routine home victory on Saturday.

Plymouth to Win to Nil

Plymouth’s recent run of positive results has been built on a series of excellent defensive displays and Argyle managed to keep clean sheets in each of their last four matches. Accrington – who have failed to notch in three of their last four away tussles – could struggle to penetrate their host’s well-drilled ranks and a stake on Plymouth to win to nil could be a good option this weekend.

Ryan Hardie was among the goalscorers when Plymouth dismantled Accrington 4-1 in November and the club’s leading marksman looks a solid option in the anytime scorer stakes again on Saturday. With three strikes in his last four appearances, Hardie has been hitting all the right notes of late and the Scottish striker could add to his tally this weekend.

Alfie Lewis, Dan Scarr, Brendan Galloway and George Cooper are all nursing injury complaints for Plymouth and all four players could be absent on Saturday. Argyle earned an important 1-0 win over fellow playoff contenders Portsmouth on Tuesday evening, to make it 12 points from 12 in League One.

Joel Mumbongo and Dion Charles are both out injured for Accrington. Jay Rich-Bagheulou, Josh Woods, John O’Sullivan and Joe Pritchard are all considered doubtful. Tommy Leigh is still suspended, though Mitch Clark should be available again following a ban. Stanley stole a point at Sheffield Wednesday on Tuesday evening thanks to a late Owls own goal.

Top Betting Odds and Stats for Plymouth vs Accrington

Below you can view our list of the top stats for Saturday’s game alongside a tool to help you pick the best odds. 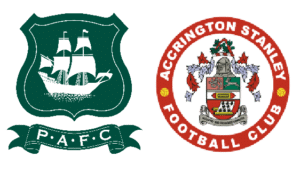 Plymouth vs Accrington will be played at Home Park on Saturday.

Who is Accrington’s leading scorer this season?

With eight goals, Colby Bishop is Accrington’s leading scorer in League One this term.