Peterhead and Dumbarton face each other in a crucial Scottish League Cup group match at the Balmoor Stadium in Peterhead. Both teams have had a very difficult start to the group stages.

Peterhead have a decent home record when it comes to going up against Dumbarton. The hosts will be banking heavily on this good record, which stands at four consecutive victories in meetings at the Balmoor Stadium. Even though both teams have lost consecutive matches in the group stages, Dumbarton are on a significant disadvantage coming into this fixture.

Dumbarton were able to get three goals in the last visit to the Balmoor Stadium and the match also witnessed seven goals in total. Yet, the offensive performances shown by the two teams in this early part of the campaign does not seem to suggest a repeat of the same, as both the muted in the offensive areas.

Dumbarton and Peterhead are two teams who are yet to make a major impact on the offensive areas in the group A. While Dumbarton have at least scored a goal from the two matches, Peterhead are yet to open the scoring.

Peterhead are in a spot of bother after back-to-back defeats. The heavy loss against Raith Rovers is particularly a major concern for the team. The team has now shipped eight goals in the opening two rounds and they face a huge task to expect qualification already. Andy McCarthy is out with an ankle injury, while Hamish Ritchie has a knee injury.

Dumbarton are likely to be happy with a moderate performance in the upcoming game against Peterhead, as little would have been expected of the team in the away games. Dumbarton are not back at home until next week when they take on Raith Rovers. There are no injury problems for Stevie Farrell’s men.

Key Stats, Odds, and Recent Form for Peterhead vs Dumbarton

FAQs on Peterhead vs Dumbarton game 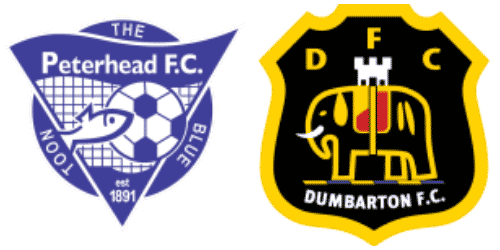 Who is the favourite team to win the game? Dumbarton