Two extremely equal teams going against each other in Ligue 2 this Saturday in yet another French classic.

The battle for the top of the table is getting fiercer with each passing fixture and the Paris vs Sochaux game is a good example of that. We believe these predictions will best describe how the game is going to play out.

Ladbrokes has the best odds for these bets and if you want to get the most out of this game double-check these odds.

The only team with better current momentum than Paris would have to be Toulouse. Paris has been demolishing the oppositions in Ligue 2 with ease and it will be very interesting to see how a game against an equal will play out. The last 5 home games for Paris against Sochaux didn’t turn out well for the away team. Sochaux doesn’t have a single victory in those 5 games, only 3 draws.

The bookies predict a draw in this game and for a good reason – the teams are very equal. Rarely in such games, you can see both sides scoring goals and such is the case with the Paris vs Sochaux clash as in only 4 games out of the last 10 did the two teams exchange goals.

This probably has to be the safest bet for this game as the 8 of the last 10 games between Paris and Sochaux resulted in 2 or fewer goals being scored. Two of those games even resulted in 0:0 draws while two other games had only 1 goal.

Paris vs Sochaux is the most interesting clash for this fixture and here is the most recent news concerning the two teams:

Sadly, Cyril Mandouki is still injured and is expected to make a return at the end of next month. The team is performing great in Ligue 2 and is currently in the 2nd position and a fierce battle with Toulouse for 1st place. Paris has 3 victories and 2 draws in the last 5 games.

Sochaux is injury-free for this game and the depth of the squad should be put to good use to catch up to Toulouse, Paris, and Ajaccio. The 4th place in Ligue 2 comes with a solid recent performance consisting of 2 victories, 2 draws, and 1 loss – the last game against Ajaccio.

Head-to-head info for the game

Here is all you need to know about the H2H games and odds for this game:

Common questions about the game between Paris and Sochaux: 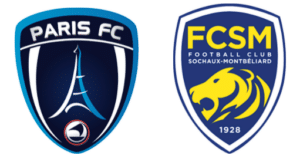