The home side has been impressive this season but Quevilly Rouen is no joke and Paris should be focused to avoid surprises. In this article, we will go over the data to choose the best predictions and picks for the upcoming weekend match.

Paris has been one of the dominators in Ligue 2 this season and is rightfully in the 2nd position right now and is expected to be promoted for next season. There have only ever been 9 games played between these two opponents, and they resulted in 5 victories for Paris and 4 draws. Quevilly Rouen has never won a game against this opponent.

In the last 9 games between these opponents, there have been 5 games that resulted in only one side doing all the scoring. In the last 5 games, Quevilly Rouen has scored only 1 goal against Paris.

In 5 of the last 9 occasions, the result was 2 or fewer goals. Paris has a very solid defense while Quevilly Rouen’s attack isn’t something to brag about. Paris is the home side here and the chances for Quevilly Rouen aren’t going to be that many.

The team captain – Cyril Mandouki, is injured and will sadly miss the game against Quevilly Rouen. The team is currently in the 2nd position in Ligue 2 and has 3 victories and 2 draws in the last 5 league games.

There are no major injury or suspension issues for Quevilly Rouen and coach Fabien Mercadal will count on his best players to take valuable points away from Paris. Quevilly Rouen is in the 12th position in Ligue 2 and has only 1 victory, 2 draws, and 2 losses in the last 5 league games.

Head-to-head data for the Paris vs Quevilly Rouen game

Those are the key head-to-head statistics and odds for Paris vs Quevilly Rouen:

Common questions for the Paris vs Quevilly Rouen game: 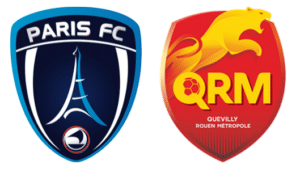