The team with the best momentum in Ligue 2 is going to try and continue this fascinating trend and bring happiness to the fans! Let’s see what the chances for that are!

Paris is the team with the best current momentum in Ligue 2 with 6 victories in a row while Le Havre has 2 victories, 1 draw, and 2 losses in the last 5 league games. Paris is ranked 4th with 1 game more to be played while Le Havre is in the 6th position. In the last 10 games between these two opponents, we had 5 victories for Paris, 3 for Le Havre, and 2 games that were a draw.

There is too much at stake here for the clubs to play quiet and defensive football. The battle for promotion is fierce and 3 points are all the two clubs will settle for from this derby. Which means goals will be scored. Paris has one of the best attacks in the league and this will likely be the case again in the game against Le Havre.

In the last 10 games between the two clubs, we had 4 games that resulted in 3 or more goals being scored. Considering the stakes in this game we’d like to believe that this will be an attractive game for the fans that will bring a lot of goals to the table. One of the most recent big games for Paris was the 4:1 victory over Valenciennes in Ligue 2 and the brutal 14:0 against CSC Cayenne in the French Cup.

Paris vs Le Havre: Paris to get 3 points

We believe Paris’s amazing momentum is too good to ignore. The team has it all – momentum, better performances in the direct games, better players, better ranking, is a home side in this clash. Our football experts predict a fight from Le Havre that will not be enough to defeat Paris – 2:1 victory for the home side.

Head-to-head data for the Paris vs Le Havre game

Those are the key head-to-head statistics and odds for Paris vs Le Havre:

Common questions for the Paris vs Le Havre game: 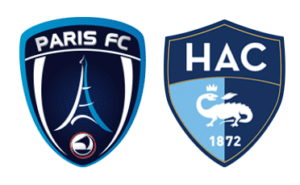