Oxford and Ipswich lock horns at The Kassam Stadium in League One on Saturday. Two in-form sides clash in Oxfordshire in a potentially crucial encounter. Read our free predictions and find the latest odds for the fixture below in our detailed match preview.

Ipswich put their nine-game unbeaten run on the line when they visit high-flying Oxford on Saturday. Read our top three predictions for this weekend’s fixture below.

Kieran McKenna’s Ipswich are in the midst of a nine-match unbeaten run in League One and the Tractor Boys could plough out another positive result at fellow playoff contenders Oxford on Saturday. The hosts are set to be without a couple of key players in striker Sam Baldock and captain Elliott Moore, and Ipswich have the confidence to take advantage.

Oxford’s recent fixtures have largely been open, entertaining affairs and both teams got in on the goalscoring act in five of their last seven assignments in League One. Oxford rarely fail to score, though their defending has been lax enough to make ideas about keeping clean sheets complete flights of fancy. We expect chances to be created by both teams again on Saturday, so stick to the BTTS market for this one.

Our third prediction for Saturday’s game leans heavily on the same logic and Oxford’s cavalier style of football we delved into in our second tip. Oxford have been putting their pedal to the metal in recent weeks and their attack, attack, attack mantra has produced over 2.5 goals in each of their last four tussles. That quartet of games averaged a healthy 4.75 goals per 90 minutes and more action is on the cards when Ipswich travel to Oxfordshire on Saturday.

Sam Baldock, Elliott Moore and Alex Rodriguez-Gorrin are all nursing injuries for Oxford, while attacker James Henry is also listed as a doubt. United needed a late spot kick to see off struggling Shrewsbury last weekend and their lengthy list of absentees had a noticeable impact on their performance.

Ipswich are set to be without injured pair Lee Evans and Kyle Edwards again this weekend, while George Edmundson is still doubtful. Edmundson missed Ipswich’s 0-0 draw with Portsmouth last weekend. Town maintained their unbeaten surge with that point against Pompey, though they missed an opportunity to land a crucial blow in the playoff battle.

Top Betting Odds and Stats for Oxford vs Ipswich 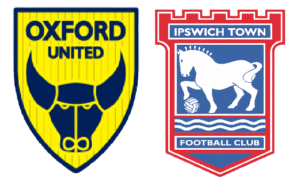 Oxford and Ipswich drew 0-0 when they last met on November 13th.

Neither club is considered a genuine title challenger this term. Both clubs are genuine playoff contenders, however.