Nimes and Guingamp lock horns in a battle for top ten in Ligue 2, 2021/22 season. The hosts have 11 wins from 30 games while Guingamp bagged 9 victories from as many games played so far in Ligue 2. Six previous meetings between these teams ended in three wins for both sides while three games ended in a draw.

Guingamp won 3-1 in the reverse game but can they get all the points in this reverse fixture away from home? Our best three predictions for this Ligue 2 match pitting Nimes against Guingamp are as follows:

Nimes and Guingamp occupy 10th and 11th places on Ligue 2 respectively. That alone sets the stage for a tough duel in this encounter. They have nearly similar results in both goals scored and concede in 30 games. The hosts have scored 35, two more than Guingamp. Moreover, Guingamp leaked 37 goals, two more than Nimes. Three draws and three wins for each side in six previous duels is another interesting stat. We expect a difficult but low-intensity game that will have three goals.

The possibility of a draw in the first-half is another expectation we have of this game. The positions of these teams on Ligue 2 table with eight games to spare speak volumes of their real intention. They are both 11 points shy of the top five places and will most likely take a cautious approach to settle for a point. Eight points from the drop zone as much as they are from the top five equally indicates a game that will likely how low activity in the final thirds.

Nimes to get a win

Nimes has never lost at home when hosting Guingamp. They have as many points as Guingamp and with home support, backing a narrow victory for Nimes is our third prediction for this Ligue 2 game.

Nimes looks comfortable in their current position in Ligue 2 table. They are tenth and have little to lose ahead of this game. However, they must fight to gather as many safety points as necessary in the next eight games. Moreover, avenging a 3-1 defeat in the reverse game will be top of the agenda for the hosts.

Guingamp has never won away at Nimes in previous trips. However, a 3-1 victory against the hosts in the first leg this season is why we expect the visitors to fight for at least a point in this game. A win will be good enough for their survival chances.

The tables below contain the latest team form, H2H stats and bookies with top betting odds for the Ligue 2 duel. 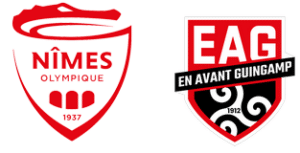 Which of these teams dominated the last five matches?

Guingamp had two wins, two draws and one loss in the last five matches.

How did both teams perform in the last five games?

Where will Nimes host Guingamp for this game?

Stade de Costieres in Nimes, France is the match venue.