Braga hold a decent lead from the first leg. Will they see that through here or will Monaco fight back? Find out with our Monaco vs Braga preview here along with the predictions and free tips we mention along the way.

Braga are coming off a 1:0 loss against Gil Vicente, however, that was their only loss in six games. Carlos Carvalhal’s men won three of their last six games, with two draws; they’ll be going up against a Monaco side that have won just one of their last seven games. As a matter of fact, Monaco have lost four of their last five games, including the reverse fixture of this tie. Considering the form of both teams, we do not think that Monaco will win this match.

Someone will fail to score a goal

Monaco have not just found it difficult to win games, they’ve also struggled in front of goal recently; Philippe Clement’s men did not score in their last two games. It’s fair to point out that Monaco’s games tend to be one-sided when it comes to goals; at least one side failed to score in all of their last three games. On the other hand, Braga have been very solid defensively; they kept four clean sheets in their last six games, allowing just two goals in that stretch. Conversely, Braga failed to score in three of their last seven games; at least one side blanked in six of Braga’s last seven games. With this in mind, at least one of these teams should keep a clean sheet.

The best odds for Monaco vs Braga

Monaco have been going through a rough patch recently; they have lost their last two games, and have won just one of their last seven games. Philippe Clement’s men will hope to overturn their 2:0 deficit today; will Wissam Ben Yedder bang in the goals?

Braga defeated Monaco by a 2:0 scoreline in the reverse fixture of this tie; they’ll be eyeing a place in the quarterfinal as they visit the Stade Louis II. Braga will hope to complete the sweep against Monaco; all eyes will be on Ricardo Horta.

The final word on Monaco vs Braga 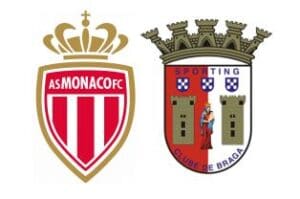