MK Dons go up against Ipswich in a meeting between two teams on excellent form. Stadium MK prepares to host this crucial game between the third and ninth placed teams in League One.

MK Dons were held by Fleetwood Town in a 1-1 draw, as the three game winning sequence for the team came to an end. Meanwhile, Ipswich Town picked up a 1-0 win over Doncaster Rovers to continue their rise up the league table.

Draw or win for Ipswich

Ipswich have been putting some excellent performances over the last few weeks. Apart from the loss to Sheffield Wednesday, Ipswich have not been making too many mistakes. The Tractor Boys have jumped to within touching distance of the play-off places. MK Dons have done well to register three wins in the last four games, but their home record has been average this season. The recent two wins over Wimbledon and Lincoln does add some gloss to the results.

MK Dons have not been scoring a lot of goals when it comes to home matches. The 2-1 win over Lincoln City is the first of the last four home games for MK Dons to produce more than 2.5 goals. Ipswich have been defensively solid with the team conceding just once in the last four games.

Ipswich Town have registered three clean sheets in the last four games and it has been a decisive reason behind their rise in the league table. However, MK Dons have been getting goals from across the pitch in recent weeks. MK Dons also have scored in three of the last four games against Ipswich.

MK Dons are edging closer an automatic promotion place but the recent draw with Fleetwood Town is a significant setback indeed. The target for MK Dons will be to finish in the second place, as Rotherham United are already nine points ahead.

Ipswich have made significant progress over the last few weeks. The club are now just eight points away from the play-off places. This would have been unimaginable only a few weeks ago when the club was struggling in the mid-table positions after the home defeat to Rotherham United.

Detailed Analysis of the Stats for MK Dons vs Ipswich 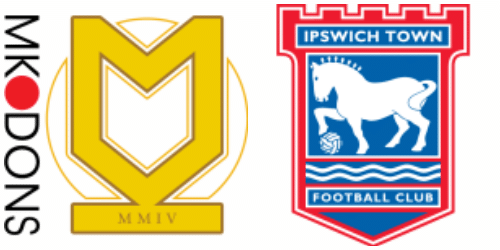 Where is the match going to take place? Stadium MK