One of the closest matchups in the upcoming round of Spanish Segunda is the Mirandes vs Real Zaragoza duel. So, check our preview of this game and our free betting tips to learn more about it.

If you need assistance to determine what is the right bet for Mirandes vs Real Zaragoza, check our favourite betting picks for this game:

Mirandes and Real Zaragoza to Draw

After a poor start, Real Zaragoza managed to win two games in a row and now they are hovering near the middle of the standings with eight points. On the other hand, Mirandes is still without a win and they are in last place in Segunda with two points from six games.

So, the guests are clearly in better form at the moment, but we still don’t see them winning this match. Mirandes will fight hard to avoid another loss and they are hosting the match, so we can see the two teams being tied at the end.

Mirandes and Real Zaragoza to Draw at Half Time

Since we can see Mirandes and Real Zaragoza tied at the end of the match, we can also see them tied at half time. After all, that’s commonly the case in matches that end in draws.

Furthermore, Real Zaragoza drew at half time in five of their six games so far in Segunda, so even though Mirandes only did that once this season, we can see this being a draw at half time.

All five most recent h2h meetings between Mirandes and Real Zaragoza have gone under 2.5 total goals, so we can see that happening again on Saturday.

After six rounds in the new Segunda season, Mirandes now remains the only team that’s still without a win. So far, they only managed to draw twice, while they lost the other four games they played, and that puts them in the last place in the standings. Simon Moreno and Cesar Gelabert are on the team’s injury list right now, while Jofre Carreras is suspended.

With two wins, two draws, and two losses in the first six rounds of the new La Liga 2 season, Real Zaragoza is clearly inconsistent at the start of the new campaign. That’s not really such a surprise if we consider their performances last year. Meanwhile, Alejandro Frances is the only player on the team’s injury list right now.

The best odds and key stats for Mirandes vs Real Zaragoza

If you want to bet on the top Mirandes vs Real Zaragoza odds, take a look at our list of odds from the main UK bookies: 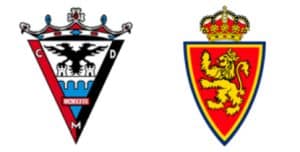