Malaga welcome promotion-chasing Almeria to the La Rosaleda this weekend. Both teams have been swimming through a sea of mediocrity in the last few weeks.

Malaga finally broke a sequence of back-to-back heavy losses by getting a 1-1 draw with Real Zaragoza. Antonin Cortes scored the opening goal in the game, but Malaga were pegged back in the second half when Zaragoza scored from the penalty spot. Almeria made the most often defensive errors by Ibiza to pick up a 2-0 win. Ramazani’s penalty and a late goal from Sadiq provided the win for Almeria.

Almeria were far from convincing in the recent outing against Ibiza. Even if the team picked up a victory and a clean sheet, it was largely down to the mistakes made by the opponent. Malaga produced an improved performance against Real Zaragoza in the last match. So far this season, home results have been able to provide some respite for Malaga, who will be happy to register even a point from the game.

The recent win over Ibiza might appear convincing, but Almeria largely relied on the mistakes made by the opponents. There has been just one game in the last five involving Almeria to produce more than 2.5 goals. Malaga have also not been among the goals and the team improved defensively in the recent draw with Real Zaragoza.

Almeria are aiming to score in a fourth consecutive game against Malaga, who have scored 14 out of their 24 league goals this season in home matches. Almeria tend to be quite poor in away matches, but they could once again get a goal or two as they did against Ibiza.

Malaga still have managed just one win in the last three months of football. Now with the promotion hopes completely gone away, Malaga will be hoping for some positive conclusion to the season. The club are still missing several players like Genaro Rodríguez, Luis Muñoz, and Juande Rivas due to injuries.

Almeria would be one of the top three teams in the Segunda Division on away form. In recent weeks, though, the club has suffered a string of disappointments in all competitions. Malaga and Almeria almost share the same number of points over the last six games. Almeria do come into the game without Dyego Sousa due to injury.

Closer Look at the Stats for Malaga vs Almeria

FAQs on Malaga vs Almeria game 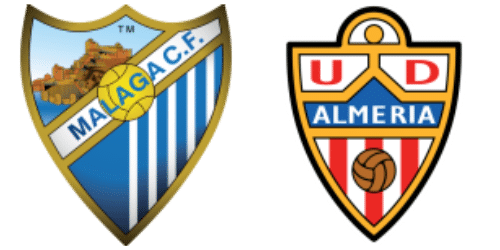