Lincoln and Crewe meet at the LNER Stadium on the final day of the League One campaign. Can the Imps beat already relegated Alexandra on Saturday? Read our free predictions and find the latest odds for the fixture below in our detailed match preview.

Crewe have lost nine of their last ten away assignments ahead of their latest test at Lincoln on Saturday. Read our top three predictions for this weekend’s fixture below.

Lincoln finish their 2021/22 campaign with a home game against relegated Crewe on Saturday and the Imps will be determined to give their supporters something to cheer about in the final fixture of the season. Crewe, who have lost nine of their last ten away assignments, should offer little resistance after a miserable year, so back Lincoln to go out with a bang and three points.

Bottom club Crewe could exit the division with the worst defensive record if they conceded more goals than Doncaster on the final day and Lincoln will be aiming to play their part in lumbering Alexandra with that unwanted accolade. The Imps notched three times in their last home test against Cheltenham and a stake on the hosts in the over 1.5 team goals market appeals again at the prices on offer.

With three goals in his last two appearances, including two in his last runout at the LNER Stadium, Lincoln’s Morgan Whittaker doesn’t want the season to end and the in-form attacker can add to his late haul against Crewe. Whittaker’s confidence should be soaring after his late flurry and he should have chances to swell his numbers against League One’s joint-worst defence.

Chris Maguire, TJ Eyoma, Josh Griffiths and Lewis Montsma are all out injured for Lincoln, though some or all of Joe Walsh, Liam Bridcutt and Cohen Bramall will hope to be back in contention. The Imps were beaten 2-1 at Accrington last weekend, though their League One status has already been secured for next season.

Crewe are set to be without Travis Johnson, Scott Robertson, Ben Knight, Nathan Woodthorpe and Rio Adebisi this weekend, while doubts remain over the availability of Zac Williams and Chris Porter. Crewe earned a good point at home to Ipswich last time out, though Alexandra’s relegation has already been confirmed.

Top Betting Odds and Stats for Lincoln vs Crewe

Below you can find our rundown of the top stats for Saturday’s game alongside a tool to help you choose the best odds. 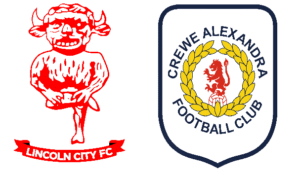 Who is Lincoln’s manager?

Michael Appleton is in charge at Lincoln having joined the club in September 2019.