The last match of La Liga 2 round scheduled for Sunday is the Leganes vs Sporting Gijon duel, so let’s take a closer look at this game and what we can expect from it.

Out top Leganes vs Sporting Gijon betting tips and predictions

If you are struggling to choose the right bet for Leganes vs Sporting Gijon, check our free betting tips for this duel:

While Sporting Gijon lost five of their last six games in La Liga 2, Leganes is without a loss in their last seven games and they are one of the hottest teams in the league right now.

With that in mind, we feel that it’s time for Leganes to finally beat Sporting Gijon since they failed to do that in their last five head-to-head meetings.

Leganes averaged 2.23 goals per game in Segunda this season, while Sporting Gijon averaged 2.35 goals per game, but despite this, we have a feeling that their next game will be a high-scoring one.

Both teams have scored in three of the last five head-to-head duels between Leganes and Sporting Gijon and we expect that to be the case in their next game too.

Furthermore, both teams scored in 52% of all Leganes matches in the league this season, while the same is true for 61% of all Sporting Gijon games in La Liga 2 so far.

After playing in the playoffs last season, Leganes is not on course to repeat that this year. In fact, the team has struggled for the most of the season, but at least they seem to be in form at the moment since they are on a good run with four wins and two draws in the last six matches in La Liga 2.

The latest odds and key figures for Leganes vs Sporting Gijon

If you want to place a bet on the best Leganes vs Sporting Gijon odds, check our selection of odds from a few different betting sites:

FAQ for Leganes vs Sporting Gijon 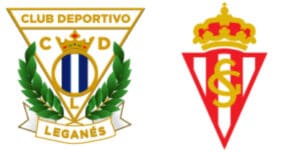