The derby of the upcoming La Liga 2 round is certainly the Las Palmas vs Eibar duel. To learn more about this game, check our preview and free betting tips for it.

Our top Las Palmas vs Eibar betting picks and tips

If you are having troubles to decide on the right bet for Las Palmas vs Burgos, check our favourite betting predictions for this game here:

After staying undefeated for the longest of any team and leading the league for a while, Las Palmas lost their last two matches in Segunda and fell to third place in the standings, just one point ahead of their next opponent Eibar.

In addition to this, Eibar beat Las Palmas in four of their last five meetings. With that in mind and because we believe that Eibar is the better team of the two, we would go with the guests in this match.

Three of the last five h2h meetings between Las Palmas and Eibar have gone over 2.5 total goals, but we don’t see that happening in this match and our next prediction is under 2.5 total goals.

Since we don’t see this match having many goals, we also don’t see both teams scoring, even though that was the case in three of the last five duels between Las Palmas and Eibar.

However, both teams have scored in just 14% of all Las Palmas matches in the league this season, while the same is true for 43% of all Eibar games in Segunda until now.

Las Palmas vs Eibar preview: Derby of the round in La Liga 2

After spending many rounds at the top of the standings, Las Palmas enters this round in third place after they lost two games in a row. Those are the only two losses for Las Palmas this season, so they have clearly been in great form since the season started, but we have to see how they will respond now after struggling for the first time. On the bright side, Las Palmas has no injured or suspended players at the moment.

With three wins, two draws, and one loss in the last six games in Segunda, Eibar has been in good form lately. Overall, the team is in the fourth place with 25 points from 14 games, one point behind their upcoming opponent Las Palmas. Meanwhile, Antonio Rios is currently injured, while Juan Berrocal is suspended.

The top odds and important stats for Las Palmas vs Eibar

If you are looking for the best odds for Las Palmas vs Eibar, check our list of odds from popular UK bookmakers: 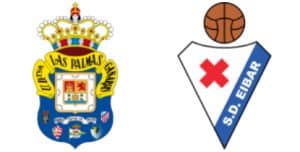