This preview focuses on the Belgian league match between Kortrijk and Standard Liege. The two teams have evenly matched coming into this fixture.

Kortrijk ended up losing for the fourth time in five matches after a 2-0 loss against Cercle Brugge. After a first half without goals, Kortrijk ended up conceding in the early part of the second-half to lose this match. Standard Liege lost for the third time in five matches after being beaten 1-0 by strugglers Seraing at home. Bernier scored the only goal in this match.

Standard Liege are struggling to put together a decent run of form, but the struggles faced by Kortrijk could end up helping them out of the problems. Standard Liege have picked up two wins in the last four games against Kortrijk, who are on a losing streak coming into this fixture. Even home from has been unable to save Kortrijk’s position.

This match will be able to teams who have struggled big time to score goals and none more so than Standard Liege, who have managed only one goal in the last six league outings. Meanwhile, Kortrijk have come up with a respectable 1.5 goals per game on an average during this period. It is the defensive struggles of the opposition that is likely to result in more goals.

Standard Liege might have a good record against Kortrijk in recent times, but the goal scoring troubles faced by Luka Elsner’s team does not give a great deal of confidence to back a lot of goals in this match. In fact, Standard Liege could end up failing to score yet again.

Kortrijk has also been showing the kind of form that could make them relegation favourites if it persisted throughout the season. Karim Belhocine has seen his team register only two victories against a club managed by Elsner. Joris Delle, Pape Habib Gueye, Kristof D’Haene, and Jonah Osabutey are out due to injury.

Luka Elsner’s team have been showing relegation form over the last few weeks. Just when it seemed that the games against Beerschot and Sporting Charleroi were about to see the return of Standard Liege to form, the home defeat against Seraing once again reaffirmed the problems. Moussa Sissako is suspended for the match while Konstantinos Laifis and Daouda Peeters are unavailable because of injuries.

Detailed Analysis of the Stats for Kortrijk vs Standard Liege 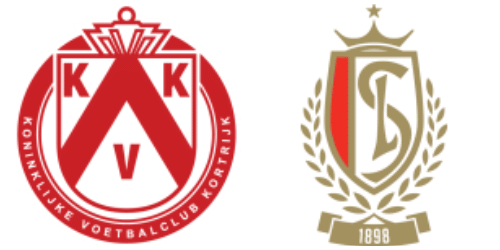 Where is the match going to take place? Guldensporenstadion

Who is the favourite team to win the game? Kortrijk