Ipswich and Portsmouth clash at Portman Road in League One on Saturday. Two of the division’s bottom three face off at the Eco-Power Stadium. Read our free predictions and find the latest odds for the fixture below in our detailed match preview.

Two in-form teams lock horns in Suffolk when Ipswich host Portsmouth on Saturday. Read our top three predictions for this weekend’s fixture below.

Ipswich are going from strength to strength under new boss Kieran McKenna and the Tractor Boys have lost just twice in 14 League One fixtures since the former Man Utd assistant took the reins in December. Ipswich have claimed 16 points from the last 18 on offer at Portman Road and though Portsmouth are on a good run themselves, they have dropped points in four of their last six games on the road and another tricky test on their travels is on the cards on Saturday.

We’re tipping 9th-placed Ipswich to emerge as victors from their clash with Portsmouth (10th) on Saturday, though Pompey wield enough attacking threat to notch a consolation in Suffolk. Danny Cowley’s men have scored at least once in each of their last nine matches, while both teams to score landed in seven of the same fixtures. We expect that pattern to continue this weekend and bettors are advised to back both teams to register again.

League One fixtures involving Portsmouth have been chock-full of excitement in recent weeks and we’re tipping the goals to flow again when Pompey visit Portman Road on Saturday. Incredibly, 100% of Portsmouth’s last nine games in the division have produced over 2.5 goals, with the contests averaging 4.11 goals per 90 minutes overall. Expect more of the same when Portsmouth take on a strong Ipswich side this weekend.

Lee Evans and Kyle Edwards are both nursing injuries and will miss Saturday’s game for Ipswich. The Tractor Boys cruised to a 2-0 win over Lincoln City on Tuesday evening, pushing their unbeaten run to eight games in the process. Kieran McKenna’s side are now just three points shy of the playoff positions in League One.

Michael Jacobs, Kieron Freeman, Shaun William, Jayden Reid and Reeco Hackett are all out injured for Portsmouth, while top scorer Marcus Harness’s absence through suspension this weekend is a big blow to their chances of success. Pompey didn’t need Harness to beat Crewe 3-1 in midweek, though an encounter with Ipswich is a much tougher test.

Top Betting Odds and Stats for Ipswich vs Portsmouth 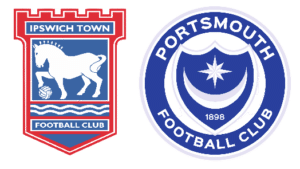 The bookies have priced Ipswich as their favourites to collect three points this weekend.