Ipswich welcome Cambridge to Portman Road in League One on Saturday afternoon. Can the Tractor Boys maintain their playoff push with another victory?  Read our free predictions and find the latest odds for the fixture below in our detailed match preview.

Ipswich put their 11-match unbeaten run on the line when they take on Cambridge in Suffolk. Read our top three predictions for this weekend’s fixture below.

Ipswich to Win to Nil

Ipswich delivered what could prove a pivotal 1-0 win over Plymouth just before the international break, securing their ninth clean sheet in 11 League One assignments in the process. On Saturday, the Tractor Boys will be targeting their seventh straight shutout at Portman Road and they are available at a great price to win to nil against a Cambridge outfit that failed to notch in four of their last five fixtures.

Ipswich have been rock-solid defensively under Kieran McKenna, though Town have been far from prolific at the opposite end and as a result, many of their games have been low on incident. Indeed, 12 of their last 13 fixtures have produced under 2.5 goals and the same market could be worth pursuing when Ipswich host a shot-shy Cambridge side on Saturday.

Over 0.5 First Half Ipswich Goals

McKenna’s Town haven’t lost at Portman Road since November and their ability to carve out results on home soil has been aided by their ability to start games quickly. The Tractor Boys have scored in the first half in three of their last five tests at home and bettors can take advantage of Ipswich’s knack by backing the hosts to net over 0.5 times in the first period against Cambridge.

Ipswich could be without Kayden Jackson, Lee Evans and Kyle Edwards this weekend, though Town have quality in reserve to bring in. The Tractor Boys are closing in on the playoff positions thanks to their 11-game unbeaten surge, though they still have a four-point gap to bridge before the campaign’s end.

Goalkeeper Kai McKenzie-Lyle, defender Jack Iredale and midfielder Jensen Weir are all listed as injured for Cambridge this week. The U’s snapped a five-game winless run with a 1-0 triumph at Wimbledon before the international break, though they had lost five out of six away fixtures directly before that.

Top Betting Odds and Stats for Ipswich vs Cambridge

You can find our selection of the top stats for Saturday’s game below alongside a tool to help you pick the best odds. 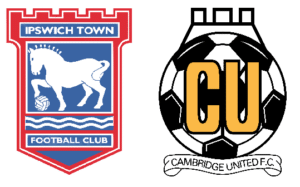 Which team is favourite to win this weekend?

The bookies have made Ipswich their favourites to win this weekend.

Can either team win the League One title this season?

Neither club is in the running to land the League One title this term.