The Huesca vs Real Zaragoza duel in the upcoming round of La Liga is one of the most interesting ones, so check our preview to learn more about it and to get some free betting predictions along the way.

Our top betting picks and tips for Huesca vs Real Zaragoza

If you need a bit of help to find the right bet for Huesca vs Real Zaragoza, check our favourite betting tips for this game:

Huesca and Real Zaragoza to Draw

These two teams are only one point apart at the moment in La Liga 2 standings and they are both hoping to get involved in the race for the playoffs, although their chances of doing that are not really high.

In any case, both teams are in similar forms at the moment and we expect a close game. In fact, we can see this match ending without a winner.

Huesca and Real Zaragoza to Draw at Half Time

Furthermore, the two teams drew at half time in their last four head-to-head duels, so we would hardly be surprised if that happens again on Sunday.

Three of the previous five h2h duels between Huesca and Real Zaragoza have gone under 2.5 total goals and we expect that to be the case in their next duel too.

With three wins, two draws, and one loss in the last six rounds of La Liga 2, Huesca seems to be in good form at the moment. However, that is likely too little to late when it comes to their ambitions of making the playoffs this season since they are already six points behind the team in the sixth place in the standings. On the other hand, seven rounds are let to play.

Just like their upcoming opponent, Real Zaragoza is in pretty much the same form since they also have three wins, two draws, and one loss in the last six games in the league. Furthermore, Real Zaragoza is just one point behind Huesca and the team that wins this game will keep hope of making the playoffs alive for a while longer.

The best stats, odds, and more for Huesca vs Real Zaragoza

If you are looking for the top odds for Huesca vs Real Zaragoza, you can find them all right here, on our website:

The usual questions for Huesca vs Real Zaragoza 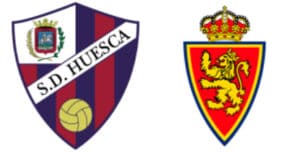