The last game of the upcoming La Liga 2 round scheduled for Sunday is the Huesca vs Almeria duel. So, check our preview of this game if you want to learn more about it and to get some free betting tips along the way.

Our favourite betting predictions for Huesca vs Almeria

If you are unsure what is the right bet for Huesca vs Almeria, take a look at our top betting tips for this duel:

Huesca and Almeria to Draw

Huesca is in the middle of the standings right now, while Almeria is fighting for the top two spots and a direct promotion to La Liga, so the guests are the favourites here.

However, Huesca is a good team and they have done well against Almeria in the past, so we expect them to put up a fight. With that in mind, a draw sounds like a good bet for this game.

Huesca and Almeria to Draw at Half Time

Since we expect this match to end in a draw, we can also see Huesca and Almeria to be tied at half time, which often happens in games that end without a winner.

Three of the last five head-to-head duels between Huesca and Almeria have gone under 2.5 total goals and we can see that being the case on Sunday too.

With two wins, one draw, and two losses in the last five matches in La Liga 2, Huesca has been as inconsistent as they have been the entire season. After all, the team is sitting right in the middle of the standings and they are unlikely to move up much, although they are just six points behind the first team in the playoff zone.

The main goal for Almeria has always been promotion to La Liga since the season started and the team is in good position to achieve this goal since they are currently second in the standings. If they can remain in the top two spots, they will earn direct promotion, but it will be a challenge to do so with other teams close behind, especially Real Valladolid.

The best odds and key stats for Huesca vs Almeria

If you are searching for the highest Huesca vs Almeria odds, check our choice of odds from the best betting sites:

The most frequent questions for Huesca vs Almeria 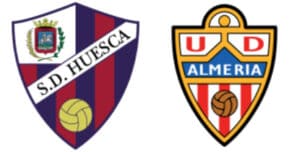