After 19 league games, these two teams are next to each other in the table and separated by just two points. Who will take the win? Find out with our Heracles vs Go Ahead Eagles preview here along with the predictions and free tips we mention along the way.

Heracles vs Go Ahead Eagles: Our top betting tips

Take a double chance on the visitors

Heracles Almelo have strung up a couple of good games recently; they have no losses in their last three games, with a win and two draws. Conversely, they haven’t been playing very well; as they’ve lost five of theirs eight games, winning just once in that eight game stretch. Similarly, Go Ahead Eagles are coming off a win, but they’ve lost four of their last five games. Both teams have struggled to win games recently, so there’s a good chance this ends in a stalemate; considering the odds however, it’s safer to take the double chance, especially considering Go Ahead Eagles won the reverse fixture.

The best odds for Heracles vs Go Ahead Eagles

Heracles have not enjoyed the best form recently; even though they are unbeaten in their last three games, they’ve won just one of their last eight games. Frank Wormuth will hope to improve his side’s poor performance; he’ll hope he can count on Rai Vloet to lead the lads to victory today.

Go Ahead Eagles managed to snap their four game losing streak by defeating Heerenveen in the KNVB Beker; they will hope to string up consecutive wins for the first time since October last year as they take on Heracles. It’ll be interesting to see if Iñigo Cordoba can help his team get the win.

The final word on Heracles vs Go Ahead Eagles 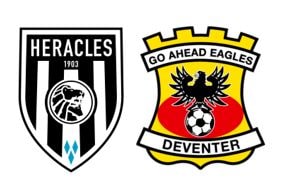