Heracles and Feyenoord go head-to-head for three Eredivisie points in Almelo on Sunday. Can Feyenoord complete the double over their hosts at the Erve Asito? Read our free predictions and find the latest odds for the fixture below in our detailed match preview.

Feyenoord have dropped points in 50% of their last eight away games ahead of their trip to play Heracles. Read our top three predictions for this weekend’s fixture below.

Heracles have tasted defeat just three times in 14 Eredivisie assignments in Almelo this season and both AZ (3-2) and Ajax (0-0) have failed to win at the Erve Asito this term. Feyenoord, who have dropped points in 50% of their last eight away matches in the league could be a little jaded following their Europa Conference League exploits on Thursday evening and Heracles can harness their extra energy to take something from Sunday’s game.

Heracles’ ability to post excellent results on their own patch has been powered by their defensive reliability and only three clubs have shipped fewer goals at home in the Eredivisie this term. The Heraclieden could never be described as prolific at the opposite end however, and as a result, six of their last seven fixtures at the Erve Asito have produced under 2.5 goals. We expect Heracles to dig in again against Feyenoord, so expect another game of slim margins.

Half With Most Goals: Second

Interestingly, 64.8% of the total goals conceded by Heracles this season were shipped in the second half of their games, largely due to the team’s risk-averse approach in the early exchanges of their matches. We expect Frank Wormuth’s side to keep things tight early on again against Feyenoord on Sunday and it could be worth backing the second period to see more action than the first again.

Orestis Kiomourtzoglou, Janis Blaswich, Rai Vloet and Ismail Azzaoui are all considered doubtful for Heracles this weekend, while Kaj Sierhuis and Mateo Les have been ruled out. Heracles snapped a three-game winless run with a timely 2-0 triumph at Fortuna Sittard last time out and that win has all but allayed any lingering relegation fears at the club.

Feyenoord could be without Lutsharel Geertruida and Justin Bijlow for their trip to Almeo on Sunday. Arne Slot’s side were involved in a thrilling 3-3 draw with Slavia Prague in the Europa Conference League on Thursday evening, though fatigue could be a factor on Sunday after a physically exhausting test against the Czechian outfit.

Top Betting Odds and Stats for Heracles vs Feyenoord

You can find our selection of the best stats for Sunday’s game below alongside a tool to help you pick the best odds. 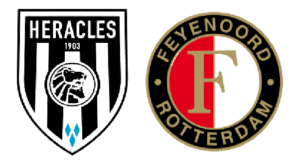 Who is favourite to win on Sunday?

The bookmakers have made Feyenoord their favourites to win this weekend.

Where are Feyenoord in the league?

Feyenoord are currently in third spot in the Eredivisie.