Heerenveen look to capitalise on Feyenoord’s recent slump in form when they welcome the third-placed team to the Abe Lenstra Stadion in the midweek action.

Heerenveen picked up back-to-back victories in all competitions after a 2-1 success over Cambuur during the weekend. This was also the first league victory for the team since the first week of December. Feyenoord lost in the league for the first time in 10 matches following a 2-0 home loss against Ajax.

Feyenoord are coming on the back of consecutive losses. The team has also not picked up a victory in three consecutive games in all competitions. Heerenveen are quite strong at home in recent weeks following a run of four consecutive games without a defeat. Heerenveen are also looking to make it three consecutive home wins over Feyenoord. However, the visitors will be careful of avoiding another defeat that can hurt their European chances greatly. At the same time, Feyenoord have struggled in recent away games against Heerenveen with just one win in the last four.

The last two games between these two clubs on the Abe Lenstra Stadion pitch might have produced over 2.5 goals including the 4-3 thriller last time around, but Feyenoord are likely to take a measured approach for this encounter after back-to-back losses in all competitions. Heerenveen have also averaged only a goal per game in recent home matches.

Heerenveen have been able to score in four out of the last five home games against Feyenoord, who have a similar record when playing at the Abe Lenstra Stadion in recent years. Both teams have a great reason to avoid a defeat and this is likely to push them at both ends.

Heerenveen remain on the verge of entering into the top seven places, but Europe may not come to the team if they continue with their poor away record. The recent wins over Heracles and Cambuur are a step in the right direction for Heerenveen, who will be without Pawel Bochniewicz due to injury.

Feyenoord have suffered a significant setback in the race for the title following the loss against attacks. The team has now fallen four points behind leaders PSV and three points behind Ajax. More slipups could effectively in the title race while also bringing the top three position into question. Luis Sinisterra and Gernot Trauner are rated as doubtful for the game.

Analysing the Stats for Heerenveen vs Feyenoord

FAQs on Heerenveen vs Feyenoord game 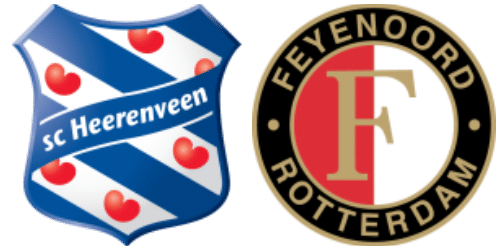 Who is the favourite team to win the game? Heerenveen