Heerenveen and Cambuur meet at the Abe Lenstra Stadion in the Eredivisie on Sunday. Cambuur are in free fall ahead of their trip to play De Superfriezen this weekend. Read our free predictions and find the latest odds for the fixture below in our detailed match preview.

Cambuur have lost nine of their last ten Eredivisie fixtures ahead of their clash with Heerenveen on Sunday. Read our top three predictions for this weekend’s fixture below.

Heerenveen lost to AZ in their last Eredivisie assignments, though the picture has been improving for De Superfriezen overall in recent weeks under interim-boss, Ole Tobiasen. Heerenveen had gone five matches without defeat before their reverse against Alkmaar and they have an opportunity to get back to winning ways at Cambuur’s expense on Sunday. The visitors have lost nine of their last ten matches and their slump is unlikely to end at the Abe Lenstra Stadion.

Sunday’s clash pits two of the Eredivisie’s most porous defences against each other and bettors would be wise to expect both teams to concede in Heerenveen. No team in the Dutch top flight has kept fewer clean sheets than Cambuur (four), while Heerenveen have recorded just three shut outs in their last 14 games. Both teams registered when the teams me back in December and a similar outcome looks possible here.

Amin Sarr has been a big hit at Heerenveen following his January move from Swedish outfit Malmo and the 21-year-old will be gunning for more goals against Cambuur on Sunday. Sarr has notched three times in his last four appearances for his new employers and his expert finishing could allow him to boost his numbers against the league’s worst defence this weekend.

Joost van Aken and Pawel Bochniewicz are inching back to full fitness for Heerenveen, though Sunday’s game might come too soon for both players. Heerenveen took an early lead at AZ last weekend before wilting late on, though their overall performance was positive. De Superfriezen aren’t in danger of being sucked into a late relegation battle and they will have their eye on a top half finish instead.

Cambuur could be without Alex Bangura, Tom Boere, Sonny Stevens and Maxim Gullit on Sunday, while Sekou Sylla is out through suspension having been sent off against PSV last weekend. Cambuur lost that clash 2-1 against the Boeren and the club have been in freefall since December.

Top Betting Odds and Stats for Heerenveen vs Cambuur

Check out our compilation of the best stats for Saturday’s match below alongside a tool to help you choose the best odds. 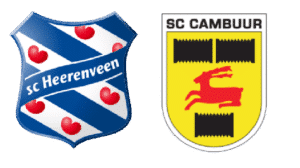 Where is Sunday’s game being played?

Heerenveen vs Cambuur will be contested at the Abe Lenstra Stadion.

Who is Heerenveen’s leading scorer?

With four goals in the Eredivisie so far, Tibor Halilovic is Heerenveen’s current leading scorer.