Galatasaray might have been the big team in Turkey in the past but right now, they’re somewhat fallen. Can they grab a win here to climb the table? Find out with our Hatayspor vs Galatasaray preview here along with the predictions and free tips we mention along the way.

Take a double chance on the hosts

This is Galatasaray’s worst Super Lig campaign since the 1981/82 season; it doesn’t help that they will be without their top scorer Mostafa Mohamed, who is representing his country at the African Cup of Nations. Galatasaray have won just seven of 20 games this season, and five of those wins were at home; they’ve managed just two wins in 10 road games this season. They’re going up against a Hatayspor side that has won five of their nine home games. It’s worth pointing out that Hatayspor have beaten Galatasaray the last two times they came visiting; they scored seven times in those two encounters, conceding just two goals. Considering Galatasaray won just one of their last nine games in all competitions, we’re making the prediction that Hatayspor will not lose this match.

Galatasaray have not done a very good job defensively; they’ve kept just one clean sheet in their last six games in all competitions. Similarly, Hatayspor have not been able to keep the goals out, they’ve conceded in nine of their last 11 games. Conversely, Hatayspor have scored their fair share of goals; they’ve found the back of the net in all of their last four games. Considering Galatasaray have scored five goals in their last three games, we believe that both teams will score here.

Our final tip for this match will be on the over/under goals market. We’ve already established that both teams have a tendency to concede goals; we should also mention that whenever they meet, their games tend to be on the high-scoring side. Four of the last five clashes between these two have gone above the 2.5 goal mark. With this in mind, we should expect some goals in this match.

The best odds for Hatayspor vs Galatasaray

Hatayspor have had some mixed results recently, they have won three and lost three of their last six matches. Omer Erdogan’s men will hope to bounce back from a disappointing loss at Kasimpasa last weekend; it’ll be interesting to see if Mame Biram Diouf will fire his team to victory.

Galatasaray parted ways with long-term manager Fatih Terim after last week’s disappointing loss against Giresunspor; they hired former Barcelona, Bayern Munich and Manchester City assistant coach Domenec Torrent. Torrent will hope to win his first game in charge; he will look to Alexandru Cicaldau to lead the lads to victory.

The final word on Hatayspor vs Galatasaray 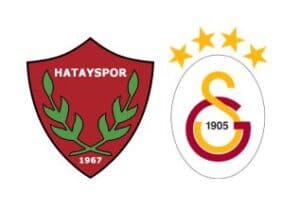