While Toulouse is nearly assured of direct promotion to Ligue 1 next season, Guingamp will fight for a place in the promotion playoffs in this duel. The hosts are currently 7th on Ligue 2, 12 points shy of promotion playoff places with 7 games to go. Will Guingamp win all their next games? This post has the details about this Ligue 2 duel, and it includes our free tips.

Guingamp and Toulouse is our first Ligue 2 preview this weekend. Apart From one loss in the last five games, Guingamp boasts four wins and four draws in the last nine Ligue 2 matches. However, keeping up with a winning outfit like Toulouse means the hosts must prepare well defensively ahead of this duel. Our best free predictions for this game are:

Goals expected on both sides

At a price of 61/100 on Ladbrokes, Toulouse is the team to score the first goal in this match. The visitors haven’t disappointed in their quest for direct promotion and come to this game with three wins on the bounce during which they netted 10 goals and leaked only two. On the flip-side, Guingamp had two wins and one draw from their last three matches, during which they scored six goals and leaked two.

Toulouse to be ahead at the break

Lastly, we are tipping the away team to win the first half of this game. Toulouse needs at least two more wins to secure direction promotion to top flight with at least five games to spare. We expect the visitors to extend unbeaten run against Guingamp to eight straight games. That will be possible if they get on the score sheet first and win the first half of this duel.

The last twenty duels between Guingamp and Toulouse were fairly even given that 8 draws, 7 wins for Guingamp and five wins for Toulouse were registered. A 2-2 draw in the reverse game and three consecutive draws in the last three meetings is a clear indication of what to expect in this game.

Four draws and three losses to Toulouse in the last seven encounters with Toulouse paints a grim picture of Guingamp chances in this second meeting of the 2021/22 season. A loss for Guingamp in this match would dim their hopes of getting a place in the promotion playoffs. However, given recent results posted by the hosts, we trust them to get a goal and hopefully, a point form this duel.

Toulouse is in top form and look to improve their promotion chances in this trip to Guingamp. Worryingly, the visitors couldn’t hold on to a 2-1 lead in the reverse game after coming from a 1-0 losing position to settle for a draw when Guingamp scored another goal in the 89th minute. However, recent results and being the second-best away team so far means Toulouse is the team to beat in this game. 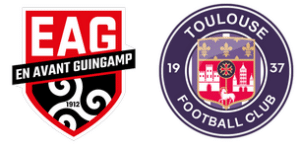 Where is the venue for Guingamp vs Toulouse duel?

Stade du Roudourou in Guingamp is the venue for this game.

What time will this game kick off?

When is the match taking place?