Check out this article to find the best predictions and odds for the upcoming Groningen vs Zwolle fixture this Friday. If you want to see more Eredivisie predictions, you can check them out via our website.

Below, you can check out what our betting experts recommend regarding the upcoming Eredivisie match between Groningen and Zwolle this week.

All odds are from Ladbrokes and are subject to change. Make sure to double-check them before wagering.

Seven out of the last eight times these two teams faced each other, the matches ended with clean sheets. We think that the match at the end of this week will also end without both teams scoring. Also, three of the last five games for Groningen and two of the last three for Zwolle ended without a BTTS outcome.

The match on Friday won’t be with a full squad from both sides. On Groningen’s side we have a total of three injuries – Damil Dankerlui, Michael de Leeuw, and Radinio Balker. For Zwolle, there are also three injuries – Bram van Polen, Pelle Clement, and Sai Van Wermeskerken. Both teams will be missing important people, but overall looking at their form this season, Groningen is our favorite.

In the tables below, you can check out the most recent match stats and bookmaker odds for the Groningen vs Zwolle fixture. 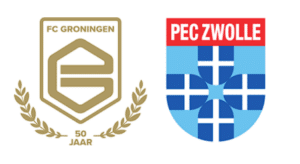