Today, we will go over the Goztepe vs Galatasaray fixture, which will be played on the 21st of February, Monday. If you want to see more Super Lig predictions and odds, you can check out our website.

Goztepe vs Galatasaray: Final Prediction and Tips for the Match

These predictions and betting lines are for the Goztepe vs Galatasaray fixture this week, created by our betting experts.

These odds are from Ladbrokes and are subject to change. This means that you should double-check your bet slip before continuing to see the most recent odds.

The last five matches that Galatasaray and Goztepe played together ended with both teams scoring goals. Also, seven of the last eight matches for Galatasaray and half of the last ten games for Goztepe ended that way. The next head-to-head between them will likely end with goals from both sides.

Our Conclusion About the Goztepe vs Galatasaray Fixture

Goztepe is at an advantage against Galatasaray for the first time in many years and they have the chance to beat them. There is only one injured player on their squad – forward Adis Jahovic who has been gone since January.

Defender Kaan Arslan and goalkeeper Fernando Muslera won’t be able to play this weekend against Goztepe because they have injuries. While Muslera has been gone since December, Arslan is injured since the beginning of January.

Head-to-Head Data for Goztepe vs Galatasaray on Monday

In the tables below, you can check out the latest head-to-head stats and data for the upcoming Goztepe vs Galatasaray game. 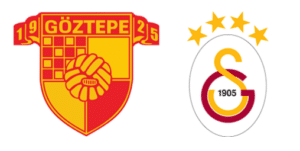