Go Ahead Eagles and Willem II lock horns for an Eredivisie clash in Deventer. Go Ahead are targeting their third straight victory in the Dutch top flight. Read our free predictions and find the latest odds for the fixture below in our detailed match preview.

Willem II are without a win in seven Eredivisie assignments ahead of their visit to Deventer to take on Go Ahead Eagles. Read our top three predictions for this week’s fixture below.

Go Ahead Eagles to Win

Despite sacking Fred Grim last month, Willem II have shown little signs of improvement under interim-boss Kevin Hofland and the Tricolores’ 2-0 loss at Feyenoord on Saturday pushed their winless run to seven straight games. Go Ahead Eagles meanwhile are threatening to break into the Eredivisie’s top half and they look ready to pounce for their third victory on the spin against struggling Willem II on Friday evening.

Willem II have looked alarmingly toothless in recent months, though their defending has been robust enough to avoid any severe hammerings, despite their poor overall results. As a consequence, many of their fixtures have seen little action and seven of their last eight assignments have produced under 2.5 goals. Go Ahead Eagles, who are averaging a modest 1.1 goals per 90 minutes this season, aren’t known for their expansive attacking football either, so stick to the unders line on Friday.

We’ve plumped for a meatier price for our final prediction this week, where we recommend a small stake on a 1-0 win for Go Ahead Eagles in the correct score market. That was the final score when Go Ahead got the better of Willem II in Tilburg back in late November, while three of the Tricolores’ last four away tussles finished 1-0 in their opponents’ favour.

Check out our list of the best stats for Friday’s game below alongside a tool to help you select the best odds.

Go Ahead Eagles have close to a clean bill of health ahead of Friday’s game with long-term absentee Sam Crowther their only major fitness concern. Go Ahead pocketed three points in hugely dramatic fashion last time out when they nicked an injury time winner through Philippe Rommens at PEC Zwolle.

Attacker Thijs Oosting is still struggling with a knee injury and the 21-year-old could sit Friday’s game out as a result. Willem II’s 2-0 loss at Feyenoord on Saturday was their ninth straight defeat on the road and the Tricolores have only scored once in their last seven away fixtures combined. 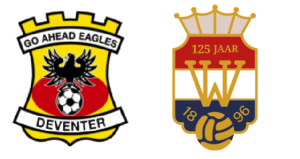 Who is favourite to win on Friday evening?

Go Ahead Eagles have been priced as favourites to win by the bookmakers.