Go Ahead Eagles look to make like difficult for Cambuur when they go up against the strugglers at the De Adelaarshorst this weekend.

Go Ahead Eagles went three games without a victory after losing 1-0 to Sparta Rotterdam during the weekend. A second-half goal from Sparta Rotterdam was sufficient to send Go Ahead Eagles to a defeat. Cambuur endured more pain in the Eredivisie after a 3-2 defeat at the hands of Ajax during the weekend. Despite putting a spirited fightback from 2-0 down through goals from Kallon and Joosten, Ajax scored an injury time winner.

Go Ahead Eagles are looking to inflict a fifth defeat in six matches for Cambuur, who have gone through a terrible run. Despite being closer to the drop zone, Go Ahead Eagles have been showing the better form over the last few weeks. Go Ahead Eagles have had some difficult run of games at home but they have still come out with a commanding set of results. Apart from the heavy loss against AZ Alkmaar, there has not been too many issues for Kees van Wonderen’s team.

Cambuur showed outstanding spirit in the recent defeat at the hands of Ajax, as the team came close to getting an unlikely point off the table leaders. At the end of the day, however, Cambuur remain poor defensively and this is likely to cost the team going into the forthcoming matches.

Cambuur have scored in four out of the last five matches. This is quite impressive considering that four of these games have finished as a defeat. Go Ahead Eagles have witnessed goals at both ends in the last four home games.

Go Ahead Eagles vs Cambuur: Match Preview and Team News

Kees van Wonderen has to turn around a losing sequence of the team to avoid slipping closer to the bottom three. Go Ahead Eagles are now just five points away from relegation fear once again. The club have a couple of injury problems with Sam Crowther unavailable because of a heart condition. Evert Linthorst and Ogechika Heil will also be unavailable due to injuries.

Cambuur are fast losing track of the European places owing to a string of losses in recent weeks. Henk de Jong also happens to have a very poor record against his opponent Kees van Wonderen with only one win in four meetings. Sonny Stevens and Maxim Gullit are the names missing due to injury.

Detailed Analysis of the Stats for Go Ahead Eagles vs Cambuur

FAQs on Go Ahead Eagles vs Cambuur game 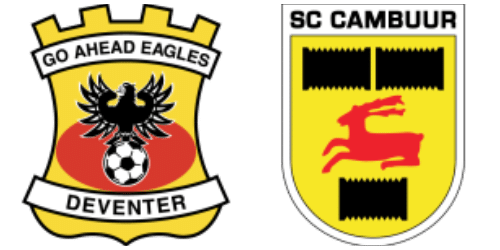 Who is the favourite team to win the game? Go Ahead Eagles