Go Ahead Eagles host Eredivisie champions Ajax at De Adelaarshorst on Sunday. Ajax are targeting their eighth straight victory in the Dutch top flight. Read our predictions and find the latest odds for the fixture below in our expert match preview.

Ajax are looking to consolidate their position as Eredivisie leaders with a positive result at Go Ahead Eagles. Read our top three expert predictions for this weekend’s fixture below.

Go Ahead Eagles held Ajax to a 0-0 draw when the teams last met in Amsterdam back in November and the plucky underdogs could keep the score down again in Sunday’s rematch. Ajax could be a little fatigued following their midweek Champions League exploits and having seen under 3.5 goals in each of their last five Eredivisie away assignments, we’re tipping Sunday game to follow suit.

With just five goals conceded in 23 Eredivisie fixtures this season, Ajax’s defensive record is remarkable and an incredible 17 of their 18 victories in the league this term have been to nil. The champions have won and claimed a clean sheet in five of their last six contests on the road and backing them to pocket three points along with another shutout against Go Ahead Eagles appeals at the prices on offer.

Sebastien Haller endured a mixed evening on Wednesday when he scored at both ends against Benfica in the Champions League, though we’re tipping the Ivorian to do damage at the right end on Sunday. With seven goals in his last five appearances, Haller is in devastatingly good form and he should have chances to add to his haul against Go Ahead Eagles.

Go Ahead Eagles vs Ajax: Match Preview and Team News

Go Ahead Eagles are one of just five teams to have taken points of Ajax in the Eredivisie this term, though their chances of upsetting the odds again on Sunday feel slim. Kees van Wonderen’s side have lost five times on the spin at De Adelaarshorst and with key defender Bas Kuipers and midfielder Giannis-Foivos Botos out through suspension and injury, Go Ahead look vulnerable.

Ajax drew 2-2 with Benfica in Portugal on Wednesday evening in the Champions League knockouts and manager Erik ten Hag could shuffle his pack a little on Sunday to keep things fresh. Nicolas Tagliafico, Devyne Rensch, Mohammed Kudus and Davy Klassen will all hope to start having been named on the bench in Lisbon.

Top Betting Odds and Stats for Go Ahead Eagles vs Ajax

Go Ahead Eagles vs Ajax Coverage and Frequently Asked Questions 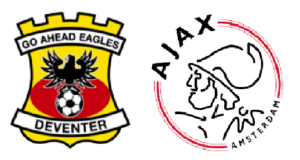 Go Ahead Eagles and Ajax drew 0-0 when the teams last met on November 7th.

Where is Sunday’s match being played?

Go Ahead Eagles vs Ajax will be contested at De Adelaarshorst in Deventer.