Frankfurt won the first leg and will fancy their chances of getting the job done back in Germany. Will they? Find out with our Frankfurt vs Real Betis preview here along with the predictions and free tips we mention along the way.

Things have not gone too well for Real Betis in recent weeks; they’ve won just one of their last six games, with two draws and three losses. Those losses include a 2:1 loss at home to Frankfurt last week. On the other hand, we have a Frankfurt side that has won three wins in a row. Considering both teams’ respective form, coupled with the fact that Frankfurt won the reverse fixture on the road; we believe that Frankfurt will emerge victorious here.

Despite their poor recent form, Real Betis have been very consistent when it comes to scoring goals; they found the back of the net in all of their last five, and nine of their last 10 games. On the other hand, Betis have not been very good at keeping the goals out; they’ve seen their defence breached in four of their last five games. In like manner, Frankfurt have consistently conceded goals over the course of their season; they have no clean sheets in all of their last 10 competitive fixtures. Conversely, Frankfurt scored eight goals in their last three games alone. Both teams scored in four of Betis’ last five, and in all of Frankfurt’s last three games. On that note, both teams should score.

We’ve mentioned that Frankfurt bagged eight goals in their last three games; their most recent games have mostly been on the high-scoring side. All of Eintracht Frankfurt’s last three games saw at least three goals scored. Similarly, Real Betis have had their fair share of high-scoring games; seven of their 10 games in all competitions went over 2.5. With this in mind, our final prediction for this game is over 2.5 total goals.

The best odds for Frankfurt vs Real Betis

Frankfurt have improved a lot recently; they’ve won three games in a row, having lost three consecutive games prior to that. Oliver Glasner’s men defeated Betis away from home in the first leg; they’ll look to Rafael Borré to help them complete the double.

Real Betis are coming off a much-needed 1:0 win against Athletic Club; they had no wins in five previous games, with two draws and three losses. Betis will hope to avenge their 2:1 home loss in the reverse fixture of this clash; keep an eye out for Juanmi.

The final word on Frankfurt vs Real Betis 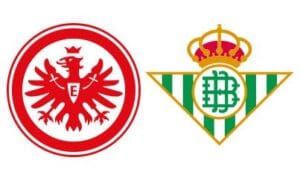