Fortuna Sittard host Vitesse in the Eredivisie on Wednesday evening. A victory for Fortuna over Vites would secure the club’s top-flight status. Read our free predictions and find the latest odds for the fixture below in our detailed match preview.

Vitesse have lost three of their last four Eredivisie assignments ahead of their latest test at Fortuna Sittard on Wednesday. Read our top three predictions for this week’s fixture below.

Fortuna took a giant stride towards survival when they won for the third time in four Eredivisie fixtures on Saturday and their 2-1 triumph at Twente was equal parts impressive and unexpected. Another victory at home to a Vitesse side that has last three of their last four matches looks possible on Wednesday and three points would guarantee the host’s top-flight status. Braver bettors might fancy backing a straight home win, though there is enough wiggle room in the odds to make a bet on Fortuna in the double chance market an appealing choice.

Sjors Ultee’s Fortuna have sharpened their edge in the final third in the closing weeks of the season, finding the net in each of their last five Eredivisie fixtures, though clean sheets remain difficult to land. Indeed, they have kept just three of them in the last ten fixtures in the league, so expect both teams to register for the eighth time in nine meetings between Fortuna and Vitesse this week.

Zian Flemming is on a one-man mission to keep Fortuna afloat and the club’s leading marksman scored both goals in Sittard’s 2-1 win at Twente last weekend. Flemming has hit four goals in his last three appearances overall and his spike in form makes him the outstanding choice in the anytime goalscorer market for Wednesday evening’s skirmish.

Aside from midfield absentee Dimitrios Siovas, Fortuna have a clean bill of health this week giving Head Coach Sjors Ultee a few decisions to make in several areas. Sittard’s superb win at Twente last time out pushed them to within a single positive result of confirming their safety. Fortuna are searching for their fourth win in six home fixtures this week.

Jeroen Houwen and Maximilian Wittek are both out injured this week, while there are also doubts over the availability of Gnantin Yann Gboho and Alois Dominik Oroz. Midfielder Riechedly Bazoer is available again following a one-game suspension. Vites are already guaranteed a top seven finish this term, though their poor form means that there is little late-season euphoria to enjoy for their supporters.

Top Betting Odds and Stats for Fortuna Sittard vs Vitesse 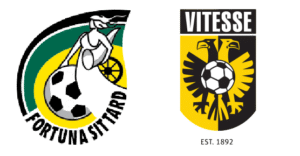 Where will Wednesday’s game be played?

Who is Vitesse’s manager?

Thomas Letsch is the current head honcho at Vitesse.