Will Utrecht march to yet another victory or will Fortuna Sittard provide a shock in this edition of the derby? Let’s find out together

Check out the information below, supplied by our soccer experts, for valuable statistics about the game ahead. For more expert Eredivisie picks, please visit our dedicated page.

In the last 10 games between these two clubs, we had 6 games that resulted in one of the sides not scoring a single goal. Fortuna Sittard’s attack isn’t anything to brag about with only 17 goals in 16 games so far this season while Utrecht has almost double that with 30 goals in 16 games. Utrecht’s defense Is also very good so far with 20 goals allowed in 16 games.

As mentioned above Fortuna Sittard’s attack doesn’t possess enough quality to overtake the well-performing defense of Utrecht. It’s a 50/50 chance for this pick according to historical data – 5 of the last 10 games resulted in 2 or fewer goals being scored but considering the recent performances of the two teams, we believe this prediction is valid.

The devastatingly bad defense of Fortuna Sittard – 39 allowed goals in 16 games and the poor attack will reduce any chances for the team for victory against Utrecht. The away team is hungry for success and will not allow for this chance to slip away. The injury of the main left-winger threat for Fortuna Sittard – Lisandro Semedo will only further complicate the task for the team. Our football experts predict a 0:2 victory for Utrecht in an easy game for them. When it comes to the goals scored during the match, we don’t think both teams will score and there will be fewer than 2.5 total goals during the match.

Head-to-head data for the Fortuna Sittard vs Utrecht game

Those are the key head-to-head statistics and odds for Fortuna Sittard vs Utrecht:

Common questions for the Fortuna Sittard vs Utrecht game: 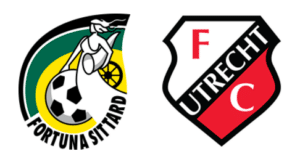