Fortuna Sittard vs Sparta Rotterdam lock horns in the Eredivisie on Saturday. Two of the league’s prime relegation candidates meet in Sittard. Read our free predictions and find the latest odds for the fixture below in our detailed match preview.

Bottom club Sparta travel to Sittard to take on Fortuna in a relegation six-pointer in the Eredivisie. Read our top three predictions for this weekend’s fixture below.

Two of the Eredivisie’s relegation candidates face off in a crucial encounter in Sittard on Saturday and we’re tipping Fortuna to squeeze a potentially vital three points out of their tussle with Sparta. The hosts have recorded victories in two of their last four home assignments, while rock-bottom Sparta have posted just a single win on the road this term. Fortuna’s ability to carve out results on home soil is worth backing on Saturday, so side with Sjors Ultee’s troops.

Saturday’s game pits two of the Eredivisie’s four lowest-scoring outfits against each other at the Fortuna Sittard Stadion and with so much at stake in this weekend’s contest, margins are expected to be wafer-thin. Under 2.5 goals has landed in 100% of Fortuna’s last four home games, while the same bet would have returned a winner in three of Sparta’s last four tests on the road. With reliable goal-getters in short supply in both camps, expect another low-scoring skirmish on Saturday.

Much to coach Henk Fraser’s frustration, Sparta have been quite prone to second half capitulation, indeed, 60% of the 40 goals they’ve conceded in the Eredivisie this term were shipped after the interval. Bettors could take advantage of Sparta’s habit in a niche market this weekend where backing the second half to see more action than the first appeals at the prices on offer.

The injury picture is relatively clear for Fortuna this week, who list defender Roel Janssen as their only doubt ahead of Saturday’s game. Sittard secured a confidence-building 1-1 draw at highflying Utrecht last time out and having climbed out of the bottom three, Sjors Ultee’s charges will be determined to strengthen their bid for survival.

Sparta Rotterdam have few injury worries to contend with this week, so expect to see a similar XI that performed well in a narrow defeat to Ajax last Saturday. Sparta will kick off Saturday’s game just a single point behind Fortuna, though the visitors hold the Eredivisie’s second-worst away record this term.

Below you can discover our list of the best stats for Saturday’s game alongside a tool to help you choose the best odds. 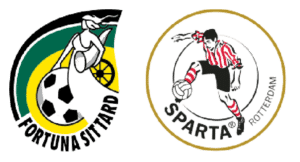 Who will referee Saturday’s fixture?