Fortuna Sittard and Go Ahead Eagles go head-to-head for three points in the Eredivisie on Sunday. Go Ahead are targeting their fourth victory on the bounce this weekend. Read our free predictions and find the latest odds for the fixture below in our detailed match preview.

Go Ahead Eagles have won three Eredivisie fixtures on the spin ahead of Sunday’s clash with Fortuna Sittard. Read our top three predictions for this weekend’s fixture below.

Momentum is a powerful force in football and Go Ahead Eagles have buckets of it to draw from ahead of their trip to play Fortuna Sittard. Kees van Wonderen’s side completed a hattrick of successive Eredivisie victories for only the second time this season when they beat Willem II 4-0 last weekend and with their confidence flowing, Eagles should be able to avoid defeat against a subpar Fortuna outfit in Sittard.

When Fortuna Sittard and Go Ahead Eagles last met in late October, the teams went hammer and tongs in a seven-goal thriller that finished 4-3 in Go Ahead’s favour. On the evidence presented that day, bettors should expect another open contest in Sunday’s rematch. Two of the Eagles’ last three matches produced over 2.5 goals and their latest test in Sittard should be similarly drama-laden.

Inigo Cordoba was among the goalscorers when Go Ahead trounced Willem II in their last Eredivisie assignment and the Spanish schemer is just one more goal away from hitting double figures for the campaign. The 25-year-old also found the net when Eagles beat Fortuna in October and Cordoba has the silky skills to make a similar impact on Sunday.

Defender Roel Janssen is Fortuna’s only injury concern ahead of the weekend’s action and Sjors Ultee has a strong pool of players to pick from elsewhere. Sittard are just one point clear of the relegation playoff position near the foot of the table, though last weekend’s 3-0 victory over Sparta Rotterdam felt like a significant moment in the battle for survival.

Go Ahead Eagles have the luxury of a clean bill of health for Sunday’s visit to Sittard. Go Ahead still have a mathematical chance of finishing in 7th, though they will need a favourable set of results inside the season’s final four games to make the continental qualification cut at the death.

Check out our rundown of the best stats for Sunday’s fixture below alongside a tool to help you choose the best odds. 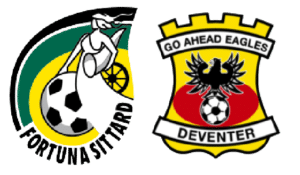 Who is Go Ahead Eagles’ manager?

Go Ahead Eagles’ current boss is Kees van Wonderen. The 53-year-old has been at the club since July 2020.