While there is little doubt about the outcome of the Fortuna Sittard vs Ajax duel, we can still see an exciting game, especially since it is the first round of the Eredivisie. So, here’s our preview of the match, along with some free betting tips.

Our best Fortuna Sittard vs Ajax betting picks and tips

If you need some help to decide what is the best bet for the Fortuna Sittard vs Ajax duel, check our top betting predictions for this game:

Ajax to Win at Half Time and Full Time

The reigning champions of Netherlands are starting the new campaign against a team that barely secured their place in the league by narrowly avoiding relegation last seaosn.

So, it’s pretty clear who the winner of this match should be and that is further aided by the fact that Ajax beat Fortuna Sittard in their last five h2h meetings, scoring five goals in four of those matches. So, our first prediction is for Ajax to lead at half time and win at the end.

Four of the previous five head-to-head duels between Fortuna Sittard and Ajax have gone over 3.5 total goals, with all four of them also going over 4.5 total goals.

With that in mind, we feel that betting on four or more goals is the way to go for this match, especially since high-scoring matches are synonymous for the Dutch league.

Dusan Tadic to Score at Any Time

One of the best players at the club and the captain of Ajax is Dusan Tadic, an experienced winger/midfielder who is the leader of the team and the team’s most creative mind.

Almost everything at Ajax starts with Tadic, who scores and assists at a very high rate. So, betting on him to score in any game is a good bet, especially against a team like Fortuna since Ajax should put multiple goals past them.

Fortuna Sittard vs Ajax preview: Can Fortuna resist the champions?

After narrowly escaping relegation last season, Fortuna Sittard fans will be hoping to avoid the same stress in the new Eredivisie season. However, Fortuna is one of the teams that are expected to be close to the relegation zone at the end of campaign and they are one of the main candidates for relegation. Meanwhile, Pandur is out of the upcoming game due to an injury.

The defending champions of Netherlands are the main favoruites to win the title once again, although PSV is right behind them, as they were last season when they lost the title by just two points. After all, PSV already beat Ajax this season in Dutch Super Cup, in a memorable game that ended in a 5-3 win for PSV.

The best odds and useful stats for Fortuna Sittard vs Ajax

If you are looking for the top Fortuna Sittard vs Ajax odds, take a look at our list of odds taken from the main UK betting sites:

The usual questions for Fortuna Sittard vs Ajax 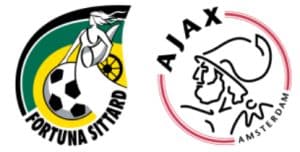